From the RuneScape Wiki, the wiki for all things RuneScape
Jump to: navigation, search
This article is about the entity. For the armour, see Pernix armour. 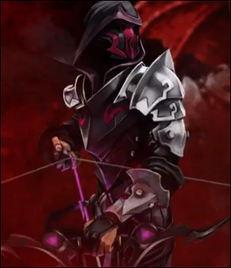 Pernix in the video "Origins of Gielinor". He appears to be wielding a Zaryte bow.

Pernix was a mysterious Zarosian who lived during the times of the Second Age, and was a dedicated and extremely proficient ranged combatant.

During the Second Age, Pernix challenged Nex to combat, believing that if he could best her, his village would be spared. Nex accepted the challenge, and his agility prevented her from catching up. Even after he stumbled, Nex was unable to hit him, and in admiration, offered him to join Zaros's army, which he accepted.

Prior to the events of the betrayal, Pernix had been spying on the Mahjarrat Lucien, and noted a Saradominist spy in the group, who Lucien eventually discovered, but did not take any action, which puzzled him. Pernix also gleaned that they were looking for a staff of extreme importance.

Eventually Pernix was recalled to Senntisten, where he oversaw the Empty Throne Room from a vantage point. He had been suspicious of the attendees, as he knew there was a traitor in their midst. Pernix suspected Kharshai of being a traitor, but he quelled his doubts when Kharshai also noted that there was a traitor. Soon after Kharshai gave judgement to the supposed traitors, Zamorak and his party barged in, prompting Pernix to fight them alongside his fellow Zarosians, and was one of the few people who witnessed Zaros's downfall.

He never fell in battle and died as an old and respected man. The Pernix armour's appearance is based on the design of his armour.

According to Nex's journal, Nex mentions that Pernix's perception on everything helped her also, as she learned how to spot the slightest of changes and was able to interact better with society as a result.

Transcripts Pernix is the author or co-author of: