From the RuneScape Wiki, the wiki for all things RuneScape
Jump to navigation Jump to search
The Old School RuneScape Wiki also has an article on: osrsw:Tears of Guthix (minigame)
This article is about the Distraction and Diversion. For other uses, see Tears of Guthix (disambiguation).
"Tears" redirects here. For the fountain in Prifddinas, see The Tears of Seren.

Tears of Guthix is a weekly Distraction and Diversion that players may use to gain experience in the skill with the lowest experience without having to train that particular skill. However, experience will not be granted from Tears of Guthix to either Archaeology or Invention until their respective skill tutorials are completed.

To participate, players must have completed Tears of Guthix and have either gained at least 100,000 total experience or one quest point since they last participated (unless they have never played before or a D&D reset token token is used). The Tears of Guthix quest entry in the Quest List will track how many experience points are required and how much time is remaining before the player can again tell a story to Juna and collect tears again.

A player must travel through the Lumbridge Swamp Caves to the Tears of Guthix cavern and tell a story to Juna, the serpent guardian of Guthix's tears. Each story told to Juna is based upon a quest that they have completed. Players require a light source to travel through the Caves as this is a dark area. The fastest method is to simply use the games necklace or use the teleport Interact option of a Light creature familiar to teleport directly, skipping the dark region of the Lumbridge Swamp Caves. 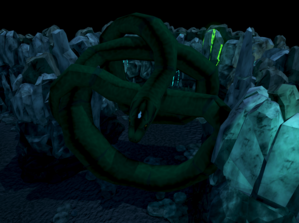 The Tears of Guthix cavern

The goal of the game is to collect the blue tears flowing from the inner walls while avoiding the green streams because they destroy tears that have already been collected. The more quest points a player has, the longer they are able to collect tears and therefore the more experience they get. The time a player has is the player's Quest Points in ticks which is 0.6 of a second. 44 quest points are required for the Tears of Guthix quest, and one is awarded upon its completion. Thus, the minimum time a player gets in this D&D is 27 seconds and the maximum time is 4:20 (or 4:50 with the quest point cape's perk). The interface shows the number of tears collected in the stone bowl, and a bar represents time remaining.

The cave has three sides, each of which has 3 segments for a total of 9 segments. At any time, three of the segments will have blue tears, three will be green and three will be inactive. A stream of tears stays in place for a given time with a small amount of variation before changing to a new location. It stays for a minimum time of 7.2 seconds, after which there is ~25% chance per tick (0.6 second) that it changes location. When a stream moves, the player must relocate to another spot with a blue stream to collect more tears. Running and movement abilities are disabled. A fresh spot with many ticks left is nearly always preferable to one that is nearby but closer to expiring. Because the streams move in a fixed order (think of them as blue 1, green 1, blue 2, green 2, blue 3, green 3), the most efficient approach is to chase one stream. Whenever it expires and appears at another location, follow it. While it may feel counterintuitive, ignore any blue streams that might be closer because they will move sooner and are therefore less efficient to collect from. The only exceptions are if you are lucky enough to have a fresh stream appear in your location before you have moved (though it is not advisable to wait and hope this happens), or when you are very close to running out of time in the game. In that case, the nearest stream may be a good choice for the final few tears. It may be helpful to position the camera view vertically and not zoom in too closely in order to see where your chosen stream jumps to. Consistent runs of about one tear per second are typical using this method. With the boosts, more than 300 tears can often be collected. Playing on a world with low lag may mean a slightly faster game response time and more tears.

Players cannot have a pet or familiar active while playing the game; a message will inform them that a follower would be too distracting. However, as an exception, players can have the light creature familiar summoned but may not interact with it while inside the cave.

An Ornate bowl increases the level cap for experience calculation from 30 to 50, increasing the maximum amount of experience per tear from 180 to 300.

The light creature familiar's special move, Enlightenment, grants a six-minute buff which gives a 10% chance of getting double blue tears in Tears of Guthix.

The quest point cape's perk provides an additional 30 seconds in the cave.

After time runs out, the player receives experience based on the number of tears collected.

The experience is added to the skill with the lowest experience, unless the player doesn't meet the requirements needed to train the skill (e.g. a POH must be owned to be able to train Construction & the Invention tutorial must be completed to unlock Invention). If all skills are level 99, the experience reward will go into the lowest of Slayer, Dungeoneering, Herblore, Archaeology, or Farming (if they are not all level 120). Lastly, the tears will not grant experience to a skill that has recently been released into the game if it is still under an experience embargo.

per tear relates to level

Players receive a message indicating the skill in which experience was received.