From the RuneScape Wiki, the wiki for all things RuneScape
Jump to navigation Jump to search
The Old School RuneScape Wiki also has an article on: osrsw:Infernal Dimensions 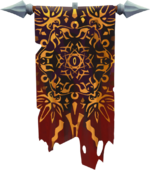 Infernus, also known as Pandemonium, or the Infernal Dimensions,[Notes 1] is the homeworld of the various demonic races. It is described as a world more like Freneskae than Gielinor, made of jagged rocks and liquid fire.[2] The largest city on Infernus is called Dis, which is ruled by the Tsutsaroth demon Gree'gar.[3]

At the centre of Infernus is an eternal fire called the Heart of Dis or the Heart of Pandemonium. All Avernic demons are spawned from the Heart and return to it upon death. Occasionally, multiple demons may spawn from the fire sharing a single soul.[4][3][5] Smoke demons are the demons living closest to the Heart, with a strong affinity for the element of smoke.[6]

Infernus is briefly visited during Aftermath, as a quick stop between the Zamorakian Undercity and the Wilderness Crater, where Zamorak is fought. The soil of Infernus is sufficient enough to make ultracompost in lieu of dragon manure.

Infernus has been ruled by three different "demon" species throughout its history: the Infernals, the Chthonians, and the Avernic. The native demons of Infernus are the Avernic, who spawn from its heart.

No more than 60,000 years ago,[7] a group of dragonkin of the Aughra faction, led by Kal'Ger, transferred their consciousnesses into Avernic bodies and became known as Infernals.[8] The Infernals conquered Infernus and enslaved the local Avernic, ruling for an undetermined length of time as 'undisputed masters' of the planet. They are the first known rulers of the planet.[2]

At some point, the Chthonians came from Erebus and invaded Infernus. They were there long enough for generations of Chthonians to be born, including Hostilius and Cacus.[9][10] The Chthonians were subjugated by the Infernals until they rebelled and overthrew them.[2] Many Infernals were killed, although some managed to escape into the Abyss.[11][12] The Chthonians also devoured each other in the power struggle, absorbing each others' knowledge and power. Over a long time, Hostilius ate each of its elders and amassed enough power to became the ruler of the planet. Hostilius then created an ordered society, with a complex bureaucracy and many different rules and laws. The most powerful Chthonians from the rebellion were given positions of status, such as a dukedom, if they supported Hostilius' new laws. Notably, Hostilius outlawed cannibalism. Simultaneously, the punishment for many crimes was to be eaten. Consequently, legal trickery was encouraged and largely took the place of open warfare. In practice, the system concentrated more power to those already in power.[9][11][13][14]

It was during Hostilius' reign that Zaros arrived, attempting to barter with Hostilius. He offered the Chthonians the secrets of travelling between worlds to devour whole new races - in return for twelve legions of demons. Hostilius drew up a Magically Binding Contract to seal the deal, but in the fine legalese of the document included a clause that stated the loyalty of these twelve legions would remain with the eldest of the signatories, who Hostilius believed to be himself. Zaros noticed the clause when reviewing the contract - but allowed it to go through. Hostilius barked with triumph - however, Zaros revealed to the assembled demons of his own origins; aeons ago, in a time that predated their race. The humbled Hostilius pledged to Zaros his twelve mightiest dukes and their legions.[11] Little did he know that in doing so he had unwittingly sown the seeds of his own eventual downfall. 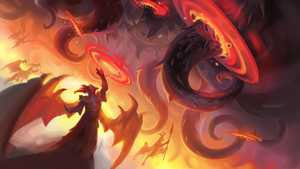 A portal in Thammaron's throne room, likely part of the dimensions

Living amongst the comparably weak humans of Gielinor was somewhat of a luxury, as in their eyes even the lowly Avernic were mighty beings amongst the elite of society. These Avernic started to develop rebellious ideas, unbeknownst to their distant Chthonian masters. The Mahjarrat Zamorak used this to sway many of the Avernic to his side - though only two demons pledged outright allegiance, both members of the Tsutsaroth subspecies.[2] When Zamorak defeated his master Zaros, he returned to Infernus and helped the Avernic triumph over their tyrannical Chthonian masters[2] - a task that took him nineteen years.[15] By the time he was done, all Chthonian demons were either destroyed, or exiled to the Abyss.[2]

During the quest The Golem, players travel to a realm where the Elder-Demon Thammaron once resided, and where he eventually launched a final assault on the city of Uzer in the Kharidian Desert in what would be later referred to as the Battle of Uzer, an important conflict in the God Wars, during the Kharidian Desert Campaign by Zamorak. The small space, which appears to be Thammaron's throne room, may have been part of an abandoned fortress in one of the Infernal Dimensions.