Legio Septimus is the head of the "True" Order of Ascension - a faction separate from the main Order of Ascension. During Nomad's Elegy, he has to be interrogated by an adventurer and two of their deceased friends in the Grim Underworld through manipulation, torture or charm, after which he will reveal vital information.

According to Septimus, he split off from the main Order of Ascension as he viewed his brethren doing "nothing" and just feeding off the crystals at the monastery. Some time after he left with many followers in tow, he met Nomad, who told him of a project similar to what the main Order was doing, and eagerly joined along with his followers. If the adventurer lets him live, it is unknown what happens to him after the interrogation.

He resembles Legio Sextus, but with a different shape floating behind him. 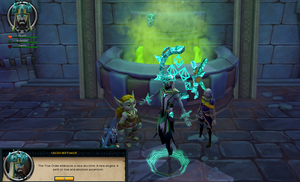 Interrogating Legio Septimus during the quest

This information has been compiled as part of the update history project. Some updates may not be included - see here for how to help out!
Retrieved from ‘https://runescape.wiki/w/Legio_Septimus?oldid=35583565’
Categories:
Hidden categories: