From the RuneScape Wiki, the wiki for all things RuneScape
Jump to: navigation, search
The Old School RuneScape Wiki also has an article on: osrsw:Enakhra
Loading...
RejuvenatedSkeletalHumanIn combatChildren of Mah

Enakhra is a Zamorakian Mahjarrat, and the only known female of the race that is currently alive[1] on Gielinor (Moia is half-Mahjarrat, half-human). Although little is known about her origins, she is known to be a rival of Akthanakos, a Zarosian Mahjarrat with whom she has feuded since before they came to Gielinor.[2]

Like the other Mahjarrat, Enakhra lived on Freneskae, the realm of perpetual warfare, along with many other tribes. Here, they would live to survive the elements and the destructive power of the legendary "Mother Mah", an Elder God that created their race and whom they would prevent from wreaking havoc on Freneskae through the Rituals of Rejuvenation and Enervation, although at least one Mahjarrat regarded her as a mere myth and the rituals as superstitious traditions.[3] Due to the constant conflict with neighbouring tribes such as the Mahserrat as well as the frequent sacrifices at the Rituals, the Mahjarrat tribe never counted more than a few hundred members and was ruled kratocratically.[4]

In the Second Age of Gielinor, however, the two demi-gods Icthlarin and Amascut travelled to Freneskae in order to recruit the Mahjarrat to fight the Zarosian invaders of their homeland, the Kharidian Empire, in the Kharidian - Zarosian War. Some Mahjarrat opposed the proposal while others agreed to go, causing a large battle to break out. Both Azzanadra and Temekel argued that the Mahjarrat should leave Freneskae to go with Icthlarin. Eventually, after the death of Salisard and the sacrifice of Abrogal, those in favour of travelling to Gielinor emerged victoriously and the entire Mahjarrat tribe accompanied the two gods to Gielinor.[4][5] There, Enakhra aided the Menaphite warriors in driving back the Zarosian army, with success. During this time, they were known as the Stern Judges of Icthlarin.

However, as the Menaphites had almost ensured their victory a couple of years later, the Mahjarrat Sliske, who had got into a feud with Icthlarin over his methods in battle,[6] approached the Zarosian legate, a Chthonian demon named Duke Ceres, and made arrangements to desert the Menaphites and join Zaros.[7][8] Most of the Mahjarrat convened at the fortress of Kharid-et and soon emerged, joining arms with the Zarosians, proceeding to slaughter the retreating Menaphite armies.[9] The god Tumeken, father of Icthlarin and Amascut, swiftly interfered by sacrificing himself, his armies and half of his empire to repel the Zarosians; he used his powers of fire to create a massive explosion, turning half of the empire into a desert wasteland as well as obliterating his own army and most of the Zarosian one. Of the approximately five hundred Mahjarrat present, less than a fifth survived the explosion thanks to Azzanadra, who quickly erected a magical barrier as protection. Enakhra was amongst those to survive and join the remainder of the Zarosian on the march to Forinthry.[9] She was given the rank of pontifex in the Church of Zaros.[10]

In the Second Age, she built a temple in the Kharidian Desert in honour of Zamorak, a then-Mahjarrat who conspired against Zaros. According to legend, she showed her temple to Zamorak, but he spurned her, claiming that he would rather have a weapon that could kill a god than a temple.[11]

It was also in the Second Age that Enakhra was sent on a mission by Zaros as part of a company consisting also of Zamorak, the Elder-Demon Thammaron, the human warrior Viggora, the archivist Perjour, and Zaros' Auspah dancer Char; a mission which ultimately resulted in the burning of a Fremennik encampment by Char, in a rage at the loss of the rest of her people. [12]

In the years following Zaros' fall, Enakhra began hunting foes of Zamorak and turning them into stone, to serve as "trophies" in tribute to him. One such trophy was the Dragon Rider Hannibus, whom she pursued relentlessly.[13] Although Hannibus attempted to throw her off his scent, Enakhra ultimately succeeded in her hunt and was eventually able to transform the Dragon Rider into a statue. She was, however, unable to deliver her gift to Zamorak in the end.[14]

Retreat into her Temple[edit | edit source]

Following this, Enakhra dwelt in her temple for thousands of years and did not come out, though the last that the humans in the surrounding area learned was that she was "thinking of ending her rivalry with Akthanakos". In actuality, Enakhra tricked Akthanakos and led him into her temple, where she cursed him and turned him into a Bone guard, a living skeleton to guard her in her solitude.

In the late Fourth Age, an expedition of knights from Avarrocka was sent into the desert to, for unknown reasons, destroy Enakhra. It may be that at the time of the mission, the Mahjarrat Zemouregal had recently enacted his Invasion of Avarrocka and the populace of the city were afraid of more attacks. The expedition was a disaster, and all of the knights were killed by the bitter Enakhra, with the exception of one, Pentyn, who was doomed to be trapped in an ancient spell that preserved his life, but kept him cold, miserable and diseased.

Release from her Temple[edit | edit source]

In recent times, taking place during the quest Enakhra's Lament, a Zamorakian mage named Lazim delved into the desert where he knew the temple to be and enlisted the help of an adventurer to uncover it. The adventurer was then able to free Akthanakos, and he and Enakhra vowed to continue their long, drawn-out rivalry in The North, where the Ritual of Rejuvenation was shortly to take place.

During the "negotiations" of who would be sacrificed during the ritual, she repeatedly suggested her old rival Akthanakos. However, her suggestions were constantly ignored by Zemouregal and Lucien. During the fight between the Zarosian and Zamorakian Mahjarrat, she fights Akthanakos, but does poorly and is almost beaten before all the Mahjarrat turn on Lucien and fight him instead. Jhallan is ultimately sacrificed, and she regains her powers and her face changes away from the Lich form. After witnessing Lucien's death at the hands of the Dragonkin, she quickly teleports away.

Sometime after the 18th Ritual, a very-powerful and near invincible Fremennik warrior named Koschei the Deathless, with the aid of the adventurer, recovered his memories and was revealed to be the neutral mahjarrat Kharshai, allowing his signature to be felt by the other mahjarrat. Shortly after, Enakhra, having tracked this signature, confronted Kharshai under the pretense of recruiting him to the Zamorakian cause. They were shortly joined by her rival, Akthankos, who wished to gain Kharshai for the Zarosian side. However, both were rebutted by Kharshai, determined to maintain his neutrality before demanding they leave him. However, before leaving an infuriated Enakhra warned him that he would be dragged into the conflict soon enough, and that when that happened, he would be in a very unfortunate position, particularly at the next ritual.

The Death of Guthix[edit | edit source] 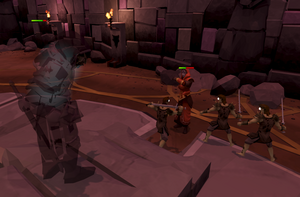 When the adventurer and Icthlarin are teleported to the Empyrean Citadel, Zamorakian Mahjarrat Enakhra, Zemouregal, and either General Khazard or Hazeel can be seen outside the door on the right-hand side, whereas on the left hand side are Zarosians Akthanakos, Azzanadra and Wahisietel. They stand in front of the Barrows brothers, who are guarding the entrance, awaiting entry. Enakhra says they disagree with Sliske's ascension into godhood and claims he cannot become a god without their consent, so they have come to stop him. Like all the others who came to the Empyrean Citadel, they left when the dragonkin Strisath went on a rampage.

The following takes place during Dishonour Among Thieves.

When Moia invites the World Guardian to Zamorak's hideout, Zamorak tells them that he needs their help in taking the Stone of Jas back from Sliske. Zamorak gives them a list of people that would help him greatly, one of them being Enakhra. Bilrach detects Enakhra heading towards Zemouregal's fortress, which Bilrach finds suspicious, although Moia thinks that she went up there to reason with him. Due to the magical wards surrounding the fort, Moia teleports the player underneath the basement. When the player dispatches a few armoured zombies guarding the basement and goes up the stairs, Zemouregal and Enakhra had been waiting for them. The player tells them that Zamorak wants them to come to his headquarters, and after the player mentions the Stone of Jas, the two head towards Daemonheim.

Zamorak had brought Enakhra along for his heist, stating that her mastery of magic would be important to overcome Sliske's deceptive systems. After the player gets the heist team ready to open the door guarding the Stone of Jas, Sliske summons shadowy clones of the team, including Enakhra. Enakhra and the others (excluding the player), fight off the shadow clones and his elite wights.

It is hinted strongly that Enakhra has an unrequited love for Zamorak, the god of chaos, and is an avid follower of his. It is first explained briefly by Aristarchus, a Menaphite scholar who specialises in desert lore. During the quest The Curse of Arrav, Zemouregal's fortress in The North is found to have several documents labelled "Notes (a-j) and Notes (k-z)", written by Zemouregal and detailing all of the known Mahjarrat to have come to Gielinor. According to Zemouregal, he wanted her help to save the Mahjarrat race but she refused, claiming that she had "feelings for Zamorak" which Zemouregal does not understand.

However, in the quest Dishonour among Thieves, she scoffs at the notion and asserts that she is not "smitten" with Zamorak, but in awe of him.

In Postbag from the Hedge Issue 43, Enakhra answers a letter asking her about her life, the life of Iban, and her home realm, Freneskae. She replies:

She also probably likes Iban because he is "imbued with my lord's unholy power: sweet with corruption."[15]

Also, in The World Wakes, she serves for the glory of Zamorak.[16] When she is defeated, she will admit defeat and retreat as she feels she has "shamed" herself in the name of Zamorak.[17]

Enakhra did not appear in Sliske's endgame. During the time shortly after, however, she is pondering what it would be like to have wings.