Fiara is a powerful Guardian of Guthix expressed in the form of a giant earwig. Her role is protecting the Fist of Guthix and maintaining balance. She will also teach people the basics of the minigame. Due to her legendary status, the druids at the site worship 'Lady Fiara' like a goddess, much to her annoyance. Fiara is a loyal Guthixian and eager to serve him, but she gets annoyed easily. Fiara is capable of electrifying people using the tendrils hanging from her abdomen. Fiara is extremely old, she was chosen by Guthix to be a guardian at the end of the Third Age.

Fiara joined the other Guthixians during the attempt to assassinate Guthix, where she was happy to meet her old friend Cres in the central chamber of Guthix's Cave. She fought the other gods' forces side by side with Valluta and the player.

I love Fist Of Guthix, well I really love the free runes for my magic experience anyway. But I have a question for you. When I've been wandering around collecting my charges I've noticed several pillars around the edge of the arena. I thought nothing of these at first, but upon noticing them the second time, I noticed they have the symbol of Saradomin, the 4 pointed star. Now I know Fist of Guthix is an activity given to us by my favourite god, Guthix, so why is Saradomin's symbol here? Did Saradomin's followers sneak past you while you were sleeping or something and vandalise your activity?

I'd love to know what happened.

The Fist of Guthix was never meant for anyone but Guthix. Unfortunately, while Guthix sleeps, there are plenty who would disagree - gods, Mahjarrat and men, all after its power. I'd expect nothing less from humans, feeble creatures that they are, but Saradomin should have known better. I recall when Saradomin's knights came to claim the Fist, and to make the caves their temple. Their efforts were frustrated, of course, and, as Saradominists often do, scrawled the symbols on the walls as they left.

I have been guarding this cave for mortal lifetimes and have encountered many who seek the power of the Fist. Thankfully, in His wisdom, Guthix deemed it necessary to further safeguard the Fist, tasking Crux Eqal with its protection. As such, those who pass me are still far from acquiring it. In the meantime, I'm left to babysit a bunch of power-crazed, thankless mortals and keep them from causing too much damage. *sigh* 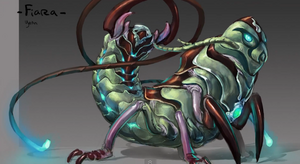