From the RuneScape Wiki, the wiki for all things RuneScape
Jump to navigation Jump to search
"Ascended" redirects here. For the components used in the Invention skill, see Ascended components. 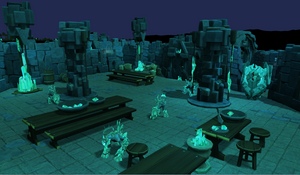 The interior of the Monastery of Ascension

The Order of Ascension are a group of former Guthixians based in the Monastery of Ascension, found in a dungeon north-west of Oo'glog. 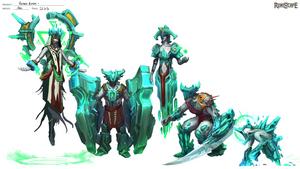 Concept art for the members of the Order

The Order of Ascension most commonly refer to the six legiones who lead the Order. These six legiones are powerful mages using magic learned from Guthix. They used this magic to experiment on villagers kidnapped from local villages in order to try to "recreate" Guthix despite his wishes and the wishes of the Guardians of Guthix, specifically Ocellus Virius, the Guardian outside of the monastery.

The order bases its beliefs on Guthix's principles, founded and made to fight against the gods. Originally, the Order was human, as Ocellus preached of freedom, but those that followed him were misled. With the followers he managed to acquire, he led them into an underground complex which would later be their monastery. During this time, Ocellus found that each generation was either unstable, destructive or insolent and had to liquify them.

Ocellus theorised that because humans worshipped the strong, he should make his followers stronger so that they would not have to worship anyone. He acquired runestones, and required Guthix's tears, as human biology limited their strength. Juna refused to help him any further, so Ocellus had his followers infiltrate the caves to steal tears from her.

From this, Ocellus began to breed towards loyalty, something which he found ironic as he originally wanted to make them independent. Using the runestones and Guthix's tears, he began to manifest crystals and used it on his followers. As the group still needed a leader, Ocellus began to promote leadership, but found that the leaders were either unstable, destructive or insolent. Ocellus surmised that by linking multiple minds together, they would have a greater understanding, so he created the Legiones in the hopes that they would understand his wishes. Ocellus created at least seven Legiones in the process.

Ocellus later found the Legiones leading a prayer and tried to punish them, but they resisted. He explained to them that this is what Guthix would not have wanted, and after that, no issues seem to have arisen. But after the god's death, the order lost its path and have since begun experimenting on local villagers in order to create a new god to worship.

In the Sixth Age, the Order seems to have stagnated, as they have not made much progress in creating new "members" or finishing the ascended Guthix. Ocellus also mentioned that the Order had stolen Algarum thread and used it to create armour for themselves. Ocellus was aware of their progress and stopped it by stealing the thread from them. They also began creating new experimental gloves, though for what use they would give them is unknown.

During this time, a seventh legio, Legio Septimus, broke away from the Order with several Ascended, believing that his fellow members did not do anything but feed off the crystals littering the complex. He and his order later allied with Nomad to create an ascended Guthix of their own, which was defeated by the player and killed by Death/Icthlarin in Nomad's Elegy. While it is unknown what happened to Septimus (since he could be spared or killed), several of his followers still lingering around in the Underworld in hiding.