From the RuneScape Wiki, the wiki for all things RuneScape
Jump to navigation Jump to search
The Old School RuneScape Wiki also has an article on: osrsw:Second Age
Not to be confused with Second-Age armour.

The Second Age, also called the Ancient Period by Reldo,[1] is one of the six ages of Gielinor and the period most often associated with the god Zaros. According to Reldo, the age lasted exactly 1,780 years.[1]

During the slumber of Guthix, Zaros and soon many other gods arrived on Gielinor, establishing territories and gaining followers. Many gods would introduce their own races to Gielinor. It is known many more gods existed on Gielinor during the Second Age than today. The exact number is unknown but it may have exceeded twenty. These gods either allied with the more powerful gods on the plane during this time, perished during the God Wars that followed this age, or fled the plane during either period. This age could be considered one of the most important ages in the history of Gielinor, as many of beginnings of the feuds between the Gods and their followers can be traced back to this age. Nonetheless the political structure of Gielinor during this age was dominated by the god Zaros, who was so influential that the Second Age could also be deemed the "Age of Zaros". Zaros founded the largest empire in the history of Gielinor during this age, and his highly aggressive means of expanding it made him feared by the gods that opposed him.

According to Reldo, the moment that ended the Second Age and started the Third was the moment Zaros was no longer present: the betrayal of Zaros by his highest general, Zamorak.[2] The Staff of Armadyl fell into the hands of Zamorak after a series of events, and it was the key to his plans to betray Zaros. When it came time to do the deed, Zamorak stabbed Zaros with the staff, but Zaros did not fall, and they struggled until the staff pierced them both at the same time, when a part of Zaros' power flowed via the staff into Zamorak. After that, Zamorak became a god and Zaros was banished, locked in the distant and empty realm of Freneskae.

The dominant calendar during this age was the Zarosian Calendar, which has since fallen out of use even among Zarosians. It is dated from the year of Zaros' invasion of Senntisten. The "Second Age" period has been constructed on the basis of this calendar: the beginning of the Second Age corresponds to the beginning of the Zarosian Calendar. Throughout the Second Age, the church of the empire changed year zero several times as they tried to estimate the exact day on which Zaros invaded Senntisten.[3] The Virtus Book from the year of Zaros' fall dates itself to the year 1987, placing the start of this version of the calendar over 200 years before Reldo's later estimate.[4] 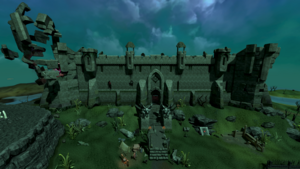