From the RuneScape Wiki, the wiki for all things RuneScape
Jump to navigation Jump to search
"Quintus" redirects here. For the keystone, see Ascension Keystone Quintus.
For the pet version, see Legio Quintulus. 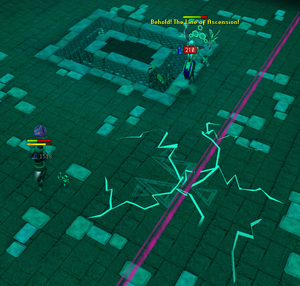 Legio Quintus is one of the bosses in the Monastery of Ascension. Accessing him requires an Ascension Keystone Quintus, which can be obtained as a rare drop from the various NPCs within the Monastery.

As with all the bosses in the Monastery of Ascension, Legio Quintus attacks primarily with a combination of a basic magic attack and a lightning attack - the latter of which is focused in a 2x2 square (expanding to a 3x3 square and then to a 4x4 square over two game ticks) which deals high, magic-style damage to the player if they stand where the lightning falls. (The lightning attack is always affixed to the player's location, and thus continuously moving throughout the fight is imperative.)

Like all of the Legiones within the Monastery of Ascension, Legio Quintus has a special ability which activates as his life points are gradually depleted in 25% intervals (every 7,500 life points drained) until death - occurring a total of three times throughout the fight. His special ability is creating "Lines of Ascension". The first line travels east to west, bisecting the room through the tiles which the player was standing on (at 75% health remaining), followed by a line from north to south spawned in the same manner (at 50% health remaining), and a third line, heading from east to west in the same manner as the first (at 25% health remaining). Standing on the Lines of Ascension deals magic damage even heavier than his lightning attack, although with proper timing it is possible to run across a line without taking any damage. As with all other Legiones, his special ability's activation is signaled by an overhead chat message.