From the RuneScape Wiki, the wiki for all things RuneScape
Jump to navigation Jump to search
This article is about the NPC. For the Slayer monsters assigned as Cres's Automatons, see Automaton (monster).
For the pet dropped by Automatons, see Cresbot.

Cres was the overseer of the automatons and guardian of Guthix's sleeping place. He was originally a human known as Ipcress, but was given his current form and name by Guthix after his initial death. He was summoned to build Guthix's chambers at the end of the God Wars, and resided inside his chambers with only his automatons for company for centuries. Juna and Fiara state that he was a good friend, and the former remembers him as lively and a bright spark in dark times.

He assisted in the fight to defend Guthix during his assassination along with his automatons. He was ultimately killed by Commander Zilyana, who mistook him for the god of balance and impaled him with her sword.

He features in The World Wakes quest, and his early history is detailed in the Roots in the Community lore story. 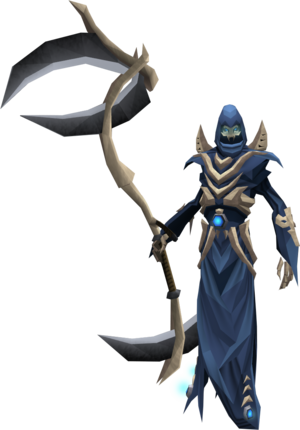 Cres was originally a human known as Ipcress who lived in a settlement in the Zarosian Empire at the border of Forinthry towards the end of the Second Age. He was a relatively skilled smith, and enjoyed gardening, attempting to build a greenhouse at one point in his old age. Harold Death (under the guise of a young human) visited him at one point, tasking him with repairing the blade of his scythe in exchange for helping Ipcress build his greenhouse.

Although Harold was able to finish building Ipcress's greenhouse within a day, Ipcress was repeatedly unsuccessful in his efforts to clean and sharpen Harold's scythe, as it seemed to repeatedly resist his attempts. For a month, he continued in his attempts to sharpen the blade while looking around for Harold, but was unsuccessful in both. 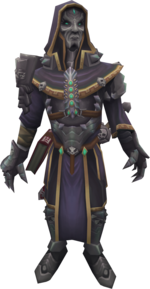 Ipcress's settlement was soon visited by the Mahjarrat Legatus Zemouregal, who revealed a new advance that would help the empire capture Menaphos: a huge construct made of corpses. He revealed that in addition to its brute force, it was capable of spreading disease to the enemy. A steel frame made from some of Ipcress's metal was being used to house the abomination, which angered Ipcress.

He began to threaten Zemouregal's soldiers with Harold's blade, but was quickly shot by an arrow, causing him to collapse. Amused by Ipcress's dissent, he prepared to kill Ipcress and add him to the construct, but was stopped at the last moment by Harold, who revealed that Ipcress was dying, and told Zemouregal not to harm him further. He then proceeded to reveal his true form and freed the souls contained in the construct of flesh after a brief confrontation with Zemouregal.

Harold then took on his human guise once more, and knelt besides Ipcress in his last moments, offering him some comfort before taking his soul.

Cres eventually awoke with his body changed into one similar to a tree, and began to hear whispers from the sleeping Guthix, who informed him that he had brought him there and gave him his current form, and that he had recognised his intelligence and granted him even greater mental capacity. He awoke alongside "others like him", who did not move or think, and eventually proceeded to program his "silent brothers" to perform simple commands. As he worked on his "brothers", Guthix eventually gave him more information on his purpose, and he came to see himself as a guardian of his brothers and all of Gielinor's creatures.

At some point, he was visited by Fiara, who gave him an egg. Guthix then told him via his dreams that it contained a serpent child with a role to play. Cres and his automatons proceeded to care for the serpent within the egg - who became known as Juna - and taught her how to grow and become a guardian alongside him. 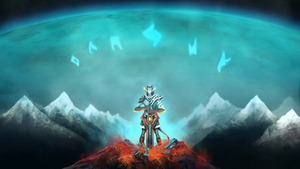 As the God Wars reached their height, he and Juna began to notice the destruction caused by the God Wars on the surface. Via his dreams, Guthix told Cres to prepare for war, and that if need be, he would awaken and exact reckoning on the young gods, but that he would need his guardians to protect him.

When Zamorak used the Stone of Jas to destroy Forinthry, this time finally came. After Guthix awakened from his slumber, he tasked Cres and the other guardians with protecting him while he created the Edicts of Guthix and cast the gods out of Gielinor.

After Guthix finished creating the edicts and banishing the gods, he chose Cres to build and guard his resting place. Cres started by building a "cocoon" of barriers around Guthix, which easily repelled the few people who attempted to break them. Eventually, people stopped coming, although Cres continued to expand Guthix's resting place, causing it to reach its current size. Cres passed the time by creating technology, such as more Automatons, and the Cresbots, which he created to be his companions.

The time spent guarding Guthix changed Cres; with only his creations to keep him company, his isolation caused him to become much less lively, to the degree that he forgot his own name.

This section is a stub. You can help by expanding it.
Main article: Assassination of Guthix

Cres is encountered by the adventurer within the temple during The World Wakes after they discover the Guardians of Guthix. Juna recognises him as an old ally of some of Guthix's guardians from before the God Wars and the fall of the Gods. Cres directs the adventurer to examine a nearby shrine, which asks them to make a judgement in several scenarios. Upon doing so the adventurer becomes blessed by Guthix.

Shortly after this happens, it becomes apparent that the guardians need to go to battle. Cres and his automatons go to battle against Zemouregal and his undead minions, as he and the automatons keep most of them off the World Guardian. After driving Zemouregal off, Cres and his automatons are soon recalled to the main room to defend against a Saradominist assault. In the chaos of the ensuing battle, Commander Zilyana makes her way to Cres, fatally stabbing him in the mistaken belief he was Guthix, but he simply laughs it off and calls her a fool as he dies.

As a result of his death, the automatons could no longer be maintained. Those that remained in Guthix's Cave became highly aggressive towards anyone who entered. There were two more groups of automatons dispatched to other areas - one at the Hall of Memories, where many of them became inactive due to a lack of maintenance (which only Cres was capable of), and one automaton remained, although in a poor state. Another group was dispatched to Guthixian Caches, where they would vigorously protect Guthix's memories from intruders; all of the automatons there are still well maintained.

Cres' creations follow the teachings of Guthix, being balanced with nature and technology at the same time. He created one of the most powerful rings available, the Sixth-age circuit, along with powerful golems known as automatons, which are capable of sensing a Mahjarrat even if they are in the Shadow Realm.

Being lonely in Guthix's home, he developed mechanical beings to provide companionship, which became known as Cresbots, although dialogue with the Cresbots indicate that they were mostly incomplete. He was the only one who had the knowledge to maintain the automatons, and with his death, it was forever lost.

Despite being long gone from the surface, the other Guardians of Guthix still remember him. He played a vital role in defending Guthix during The World Wakes and died protecting him.

This information has been compiled as part of the update history project. Some updates may not be included - see here for how to help out!
Retrieved from ‘https://runescape.wiki/w/Cres?oldid=35643869’
Categories:
Hidden categories: