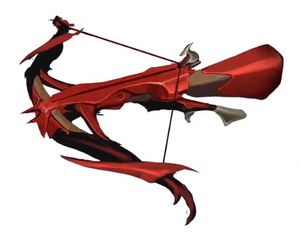 Concept art of the dragon crossbow.

A dragon crossbow is a crossbow wielded in the main hand slot, and is currently the fifth strongest non-degradable crossbow in the game. It requires a Ranged level of 60 to wield. It is made by using a crossbow string on a dragon crossbow (u), requiring 94 Fletching and granting 100 experience.

The crossbow can be taken to Ocellus outside of the Monastery of Ascension, along with the six Ascension signets (dropped by the Ascension's mini-bosses, the Legiones) and 100 ascension shards to create an ascension crossbow.

This information has been compiled as part of the update history project. Some updates may not be included - see here for how to help out!
Retrieved from ‘https://runescape.wiki/w/Dragon_crossbow?oldid=35703535’
Categories:
Hidden categories: