From the RuneScape Wiki, the wiki for all things RuneScape
Jump to: navigation, search
The Old School RuneScape Wiki also has an article on: osrsw:Mah

"Mother" Mah was the youngest of the five Elder Gods[1], as well as the weakest, and was responsible for creating Zaros, Seren, the Mahjarrat tribe, and the Muspah, and was the only known Elder God to have deliberately created life for purposes other than protecting Elder Artefacts or building worlds. She also created the Mahjarrat tribe, which were created first, and the Mahkorat, Mahserrat and Chelon-Mah tribes.

Wahisietel (as Ali the Wise) first mentioned her in Tale of the Muspah as a "cruel and archaic creator-god" who created the Muspah[2], which is further elaborated on in Wahisietel's memory from the Mahjarrat Memories miniquest.

Mah makes her first appearance in Fate of the Gods, first dormant on the Freneskae volcano but awakening eventually after Zaros has been reincarnated. She later appears in Children of Mah where she meets her demise. 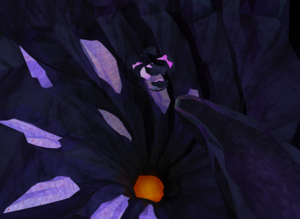 The egg from which Mah hatched.

During the previous cycle of the universe, Mah was creating planes along with the other Elder Gods. For some reason, Mah became fascinated with life in that cycle, creating butterflies. This was something the Elder Gods had never done before, and therefore Jas assumed an illness had befallen Mah.[3] At the start of the current cycle, an icy corruption tore through her core which made her malformed at birth. Seren believed someone willed it on her, but Azzanadra realises that it was not Wen, but instead something else.

Mah was abandoned by her sisters, who all thought her to be stillborn, but she survived, the lack of Anima Mundi severely stunted her mental capacity. After clawing her way out of the crater she was born in, she settled in the opening of the crater. Her instincts made her desire to create, and from crystals she created a being she infused with darkness, Zaros. She also created a being of light, Seren, as a counterpart to Zaros. Mah created Zaros and Seren as polar opposites of each other, and like a magnetic force Zaros and Seren were always drawn to remain close to each other and to Mah. It is unknown how many years Zaros and Seren stayed with Mah. Zaros believed that he and Seren were mere toys and resented this, Seren however believed Mah considered them her children and loved them dearly. Over the aeons Mah grew weaker and her power over Zaros and Seren began to wane. Zaros and Seren could begin to spend time apart from her and each other allowing them to think more clearly and independent. Zaros' curiosity of the universe made him plan to leave, he offered Seren to come along, but she refused, believing they were indebted to Mah for their existence. Finally when the opportunity arrived Zaros left Mah, Seren and Freneskae.

The Dreams of Mah[edit | edit source]

Mah missed Zaros, although she was sleeping most of the time, in her lucidity she began to dream new beings into existence: the Dreams of Mah, who were pale imitations of Zaros and Seren, the first tribe took the name Mahjarrat; the Children of Mah. Seren feared that the Dreams of Mah were a waste of Mah's dwindling energy. Seren met with some of the Dreams of Mah posing as Mah herself, and instructed them to regularly sacrifice one of their numbers to restore Mah. Seren kept posing as Mah to ward off the various tribes that had formed over the years. However, Seren's hopes of restoring Mah were not fulfilled, as Mah grew weaker and slowly fell comatose, having frequent nightmares. Her nightmares would cause horrific creatures to form. She occasionally became semiconscious, but did nothing but scream and hurt herself and the planet. Mah's nightmares manifested as Muspah; grotesque and instinctual beings, who helped keep the Dreams of Mah at bay. Seren feared that Mah might be able to rip Freneskae apart, as Mah's uneasy slumber caused violent earthquakes, so she once more appeared before the tribes. She instructed them to engage in the Ritual of Enervation, when these tremors began. This would allow the tribes to create offspring by siphoning some of Mah's energy, which would quell her violent tossing.

Seren hated herself for doing this, but thought it was the only solution to stabilise Mah. Beginning to fear for Mah's life, Seren decided to leave Freneskae and search for the other Elder Gods believing that they might be able to do something for her, if only making her passing easier. Seren left, hoping to find a solution, though she never did.

The legends of the Mahjarrat[edit | edit source]

According to Mahjarrat legends, Mah was an evil goddess that was said to have created the Mahjarrat atop a volcano, which led the Mahjarrat to call her Mother Mah. Apparently, ancient Mahjarrat were said to take a pilgrimage to the volcano in order to speak with her and learn magic, construction and other aspects of survival. When she slept deeply, hordes of Muspah - powerful beings created by combining her most fearsome creatures - are said to have spawned from her dreams, with the only known way to stop them being performing a sacrifice to awaken her. When she got angry, she is said to have created earthquakes and avalanches, with the similar Ritual of Enervation, or reproduction, being the only way to calm her and prevent it.[4]

Wahisietel believed her to be nothing but a myth, as both she and the Muspahs had not been sighted for thousands of years before his birth.[4] Despite this, both the sacrifices in her name and the Ritual of Enervation remained part of Mahjarrat culture while they remained on Freneskae.[4] Upon being approached by the Menaphite gods Icthlarin and Amascut, the Mahjarrat voted to leave Freneskae for Gielinor. After Amascut was disgusted by the Mahjarrat and went into Mah's volcano, a "great bellowing roar" came from it and rocks rained from the sky. While unable to prove it, the Mahjarrat Bilrach believed it to be caused by Mah. [5]

When the Mahjarrat arrived on Gielinor, and when Azzanadra told Zaros of Mah, he did not question her existence, and on his suggestion, they resumed the sacrifices, as on Gielinor, this would be known as the Ritual of Rejuvenation, restoring the power of the Mahjarrat by opening a gateway to Freneskae powered by the sacrifice, in order to siphon some of Mah’s energy. While the modern Mahjarrat disputed whether or not Mother Mah truly existed, they continued to mate only during earthquakes due to the legend. While in Freneskae, they had no need for rejuvenation rituals, as the presence of Mah’s elder energy on the planet nourished their powers continually.[4]

Unlike the other elder gods, it is said that she preferred to work on her own,[6] though the truth was quite different.

The following takes place during Fate of the Gods. 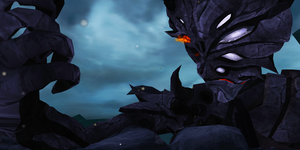 Mah awoken and lashing out by Zaros' and the player's presence.

The World Guardian travels to Freneskae to either help or sabotage Zaros, the Elder God stirs, unconsciously sending muspahs and terrifying screams at them. After the nightmare, the World Guardian heads into the crater and discovers her essence, albeit faded. Using an Elder Artefact found in the chamber, they were able to reinvigorate this energy and created a simulacrum for Zaros to use.

Once Zaros shaped the simulacrum to his own liking, Mah immediately sensed her creation's return. Screaming in a fit of unparalleled rage, she attempted to smash the intruders, but Zaros teleported himself and the World Guardian away seconds before she could flatten them. Mah soon left the crater in pursuit of the two, but they had already escaped Freneskae by then and Mah eventually returned into a comatose state in another area of the planet.

A few years into the Sixth Age, the remaining Mahjarrat realised that their energy was draining at an alarming rate despite having just completed a Ritual of Rejuvenation only a few years ago. Zaros, Zamorak and Seren, each individually, also noted their energy is being slowly siphoned from them. Zaros, having returned to Gielinor, approached the Mahjarrat at the ritual site in The North and offered salvation and freedom from their Rituals of Rejuvenation. He asked the Mahjarrat to meet him on Freneskae at the Ritual of Enervation site. There the Mahjarrat encountered Mah and note that she had dreamt a monstrous ritual stone into existence that pierced the clouds and through the Abyss as an attempt to reclaim her energy and siphon it back across the worlds. As Zaros, Zamorak and the other Mahjarrat prepared to siphon the last of Mah's energy, which would nullify the rituals they had done for so long, Mah's night tremors reached their peak. Zaros asked the World Guardian to head up to where Mah dreams and intercept anything she might spawn.

The World Guardian found Seren with Mah near the ritual stone. The Mahjarrat ritual destabilised Mah, and Seren could no longer soothe her. Seren told the World Guardian that if she tries to stop the ritual Mah may descend into terrors and untold destruction of Freneskae. She asked them to enter Mah's nightmare and find a way to calm her. 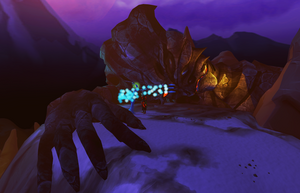 Seren kills Mah out of mercy.

The World Guardian entered Mah's nightmare and attempted to drive back and combat her nightmares; the muspah, the Mahjarrat, and finally Zaros and Seren. While the World Guardian fended off Mah's nightmares, Seren noticed a spiral of blue icy crystal torn into Mah's core, which she recognised as the origin of Mah's malformation and suspected that one of her own may have caused it intentionally. The World Guardian left Mah's nightmare just as Zaros and the others had finished their ritual. Seren stated that Mah is irreversibly depleted by the ritual and that she would never wake up again. Finally realising that Mah had lived an agonizing existence, Seren launched a spell to end Mah's suffering and blamed Zaros for her demise. After Seren departed from Freneskae, Zaros made his way to his creator's remains, expressing a profound sadness. He later took Mah's core and showed it to the remaining Elder Gods on Gielinor as proof of her demise.

After the ritual, the various nightmare creatures Mah dreamt manifest into corporeal beings. Due to her death, it is likely that both the nightmares and muspah will fade away in the near future, having been directly linked to her.