From the RuneScape Wiki, the wiki for all things RuneScape
Jump to navigation Jump to search
The Old School RuneScape Wiki also has an article on: osrsw:Viggora
Mysterious ghostViggora? (edit)? (edit)

General Viggora, also appearing as Mysterious ghost, was once a powerful and vicious human warrior of the late Second Age. He was one of the few Zarosian generals, and the only of them to be human. He built the Slayer Tower, a massive and dark tower of Morytania that holds many horrific beasts that require a special technique in order to be slain. Despite being a Zarosian general during the Second Age, he eventually stopped following Zaros, and became a follower of Zamorak, who was another Zarosian general at that time.[1] He assaulted Zaros' castle with Zamorak, who was trying to become a god by overcoming Zaros. He watched Zamorak surprisingly defeat the Empty Lord and almost ascend to godhood as a result. However, when Zaros fell, Zaros cursed all those who played a role in Zamorak's plot, and, since Viggora was human and had a much shorter lifespan than the others, the curse was stronger on him, turning him into an invisible ghost for the rest of eternity. Since the other Zamorakians were alive much longer and had longer lifespans still, the curse of Zaros had a much less harmful effect on them and it is unknown what these effects even were. Viggora can be found in three locations: the Slayer Tower, Rogues' Castle and Edgeville Dungeon. In order to see him and talk to him players must wear the Ring of visibility and a Ghostspeak amulet or its variants.

Viggora is the final NPC that players must speak to in The Curse of Zaros miniquest, and explains much of the story of Zamorak's betrayal of Zaros.

In Dishonour among Thieves, Viggora serves as a spy for Zamorak, using his invisibility to locate the Stone of Jas within Sliske's hideout. Zamorak praises Viggora for being such a faithful servant and expresses that he wishes he could break the curse on Viggora.

Viggora can be found in only one of the following locations that varies between players:

In order to see him and talk to him players must wear the Ring of visibility and a Ghostspeak amulet or its variants. 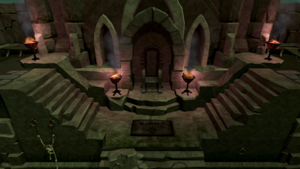 Viggora was, for much of his early life, a warrior, and quickly became the chief of his tribe. He and his tribe were approached by Zaros, who according to Viggora had no human soldiers (or at least no human generals) at that time. Zaros claimed to see their true potential and promised that he would make them a mighty race under him if they bowed down to him and fought in his armies.[2] The Mahjarrat and demon forces in Zaros army treated Viggora, who had achieved the rank of Legatus, with disdain. This made Viggora resolve to show the other generals what humans were capable of, and built the Slayer Tower.[3] Despite this, the other generals mocked him even more, and in turn, Viggora intended to make the Slayer Tower even larger. Although he had many plans, he soon returned one day to find the tower sinking into the swamp, with the dungeons being flooded, which completely humiliated him, and he abandoned the tower.

The only Zarosian general that didn't mock Viggora was Zamorak, one of the most powerful Mahjarrat and the Legatus Maximus of Zaros at that time.[4] Despite having served The Empty Lord for many years, Zaros had not kept his promise, which made Viggora transfer his allegiance to Zamorak instead, who was planning to overthrow his master.[5]

At the time of Zamorak's betrayal, the majority of his followers, or at least his closest warriors, were either Mahjarrat, vampyres, demons and Dragon Riders. Viggora remembers with pride that he was considered equal to the other magical races that made up the bulk of the army, and says "I remember Lucien, who struggled to lift a blade.", and believes that in some ways he was even more powerful than them.

Involvement in the betrayal[edit | edit source]

Once the Staff of Armadyl had passed into the possession of Zamorak, through a series of events involving the other cursed ghosts (Valdez, Rennard, Kharrim, Lennissa and Dhalak), Zamorak and his most trusted generals (namely Hazeel, Viggora, Drakan, Thammaron, and Zemouregal) went forward to Zaros' castle, under the pretence that they were there to discuss battle plans, and there they engaged Zaros in battle.[6] Viggora and the others kept his legion of bodyguards, for whom they were more than a match, at bay while Zamorak flanked Zaros and plunged the Staff of Armadyl into his back. This enraged and weakened Zaros, but did not kill him, and he retaliated, managing to impale Zamorak upon the Staff along with himself.[7] Following these events, some of Zaros' power was transferred to Zamorak, nearly turning him into a god. After that, Zamorak seemed to have become much more real, and Zaros slowly faded away, cursing all that played a role in the betrayal, including Viggora, and Zamorak eventually attained Godhood by using the Stone of Jas, which later led to the God Wars and the Third Age.[8]

Cursed by Zaros to wander the world as a ghost, Viggora appeared to have gone mad over the passage of time, having been unable to see and speak to anyone for thousands of years, but witnessed numerous events, such as the God Wars.

The following takes place during The Curse of Zaros (miniquest).

Eventually during year 169 of the Fifth Age, a human adventurer encountered Viggora, after having been directed by Dhalak while learning more about Zamorak's betrayal. Viggora, like the other humans involved in the betrayal, were shocked and surprised that someone could see and hear them. Due to his time wandering in the Shadow Realm as a cursed ghost however, he initially mistook them as a random stranger, only to learn that they were here about the curse.

Much to his anger however, the adventurer had no means to break the curse, and demanded that they tell him how they knew of his name. Upon hearing that Dhalak was the one who mentioned him, Viggora was delighted to see the weak-willed mage was cursed alongside him.[9]

From this, Viggora was able to correctly deduce that Valdez, Rennard, Kharrim and Lennissa were also cursed alongside him and Dhalak. The adventurer was surprised by his guess, as it was completely correct. Viggora was delighted that they too had also been cursed, his mood lifting significantly, and he allowed them to ask any question they wanted.[10]

He told them about Zamorak's betrayal, and how he had been more affected by the curse compared to the other races due to their magical nature. In return for having some company and learning about the fates of the other humans involved, he gave them his cloak in gratitude, hoping that it would bring them luck in battle. The adventurer was curious as to how the curse would be broken, which Viggora suggested that either the Empty Lord return or die, though he stated that he would rather be cursed than live under his rule again. He was surprised the adventurer did not know who the Empty Lord was, so he simply told them that the Empty Lord was Zaros.

The following takes place during Dishonour among Thieves.

When Zamorak returned to Gielinor and was defeated by Saradomin during the Battle of Lumbridge, he retreated to his hideout underneath Daemonheim, provided by Bilrach. Zamorak learned of the Stone's location and intended to take it back, requesting the World Guardian to find and recruit members of the strike force that he needed to pull off such a task.

Once everyone was assembled, Zamorak began to rally his assembled team, just as Moia informed him that she had sensed Viggora had returned. Zamorak then ordered General Khazard to open a window into the Shadow Realm, so that all present could see him. Zamorak lamented the fact that he was cursed, but Viggora stated that with his return, the curse over him was broken, allowing him to think clearly for himself.[11] Viggora informed the group of where the Stone of Jas was located, warning them of the various traps Sliske had put in place. Zamorak thanked him for his service, stating that if he could, he would give his life back, wishing the group luck as the mirror closed, hiding him from view once again.

Following the attempted heist, Viggora learned of the events from the adventurer who had visited him before. He was disappointed that Sliske got away with the Stone, but was pleased to learn that Zamorak had managed to siphon some power. He decided to liaise with the others, believing that they would need his services.

Transcripts Viggora is the author or co-author of: