From the RuneScape Wiki, the wiki for all things RuneScape
Jump to navigation Jump to search
The Old School RuneScape Wiki also has an article on: osrsw:SaradominThe RuneScape Classic Wiki also has an article on: classicrsw:Saradomin
"Sara" redirects here. For the Divination NPC, see Sara Onnear.
This article is about the god. For other uses, see Saradomin (disambiguation).
SaradominGod of Shiny Light, The Blue Giant, Lord of Light, Holy Archmage, Lord of Order, Bringer of Light, Polemarchos Autokrator? (edit)

Saradomin (pronounced /ˌsærəˈdoʊ̯mɪn/[1]) also known as the Lord of Light by the White Knights[2] is the god of order and wisdom, and is believed to be the most widely worshipped god on Gielinor. Additionally, he appears to be strongly associated with light as well, with various attributes, such as the Book of Light, referring to him as such.[3] Saradomin was born a human.[4]

In the Third Age, he founded the Ordo Templi Saradominis, a highly secretive, military and espionage organisation based near Falador, from the remnants of the Zarosian order of a similar name. He is even said to give direct orders in person to their current head of operations and second-in-command (after Saradomin himself) - Sir Vey Lance.

Presently, Saradomin has a vast number of followers, most of whom believe him to be the god of good, and there are far more churches dedicated to him than to other gods. Most of his modern followers reside in Misthalin, Asgarnia, Kandarin and Entrana, but there are several groups outside these areas. Unlike those of Zamorak or Guthix, his followers consist almost entirely of humans, though that was not always the case. Saradomin's symbol is a four-pointed star (that is usually coloured gold or silver), which he likely took from his crown. Saradomin was the first god to return to Gielinor in the Sixth Age, after Guthix's death.

The Elder Crown, in possession of Saradomin, during the Third to Fifth Age.

Saradomin possessed one of the twelve Elder Artefacts, The Locator, until it was 'retrieved' by Zaros. This item is used to locate all the other artefacts. However, possessing any of the other artefacts will likewise reveal the crown's location. It is known to have been in his possession for well over 10,000 years.

The Saradominist religion makes heavy use of symbolism and glorification, and thus Saradomin may at times have been portrayed in a different light throughout the history of Gielinor than what may be the case, and although Saradomin is largely benevolent and wants to do things he regards as good, this does not mean that he is the personification of good itself, nor that his methods reflect his goals, as Saradomin is indeed relentless in his pursuit for order and peace.[1] Saradomin has himself expressed a hope that the ends justify the means.[5] Saradomin is also quick to anger, and has according to himself done things in his past that he regards as shameful and now regrets having undertaken them,[6] such as razing the city Askroth to the ground when they angered him by refusing to accept his rule.[7][8]

Although Saradomin is from Teragard, he has little remaining tie to the culture or technology of that world. Saradominist culture is instead based largely on icyene culture, filtered through the interpretation of Saradomin himself and his many human followers. As more and more humans from the former Zarosian Empire joined Saradomin, they brought with them Zarosian cultural mores, some of which were adopted into the culture as a whole. Many of Saradomin's followers and forces are nearly fanatically loyal to him, as he devotes a great deal of effort to making sure this is the case by promising them peace, prosperity, and protection from harm. 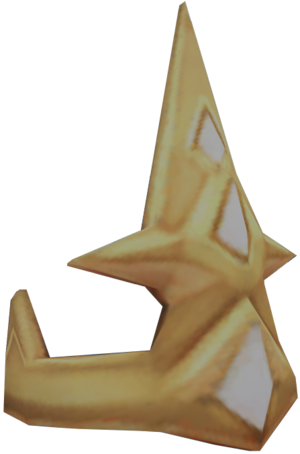 The Elder Crown in the Sixth Age.
Main article: Saradomin/History

As a god, Saradomin has been shown to have extreme power and abilities. He can teleport himself, objects, and other beings anywhere on a whim except when another being that also has extreme power that either doesn't allow it, or can't be forced on.[9] He can also enlarge both himself and objects to gigantic sizes and infuse power into weapons and other beings. He is also in possession of the Elder Crown, which makes it possible for Saradomin to locate other Elder Artefacts while exposing him to other gods who are in possession of other Elder Artefacts.[10] However, the Crown can only pinpoint which planet these Artefacts are on, and not their specific locations, much to Saradomin's frustration.[11]

Despite maintaining a powerful beam while locked in battle with Zamorak, he could still produce area of effect spells that would empower his followers or weaken his enemies.

Furthermore, as evidenced by his interactions in The Death of Chivalry, Saradomin is capable of creating manifestations of himself elsewhere in the world, that can interact with the world and its inhabitants,[12] as well as teleport and cast spells, even while the true Saradomin is focused on other tasks (such as battling Zamorak); a privilege of being a high-tier god.

Saradomin also gained a great deal of power after he won the Battle of Lumbridge, fuelled by Guthix's divine energy. 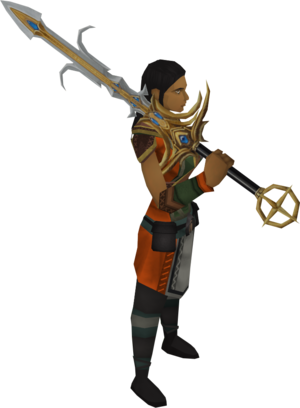 He is capable of summoning lightning around him that is powerful enough to instantly kill armoured knights.[13] He created a force field that isolated himself and Nex from the rest of the battlefield, confining them to a small area to avoid collateral damage. He fought Nex, who was empowered by Zaros's four elemental crystals, to a standstill.[14]

Saradomin has a vast following, both on Gielinor and across the Multiverse. Because of all the people and races allied with him, many Saradominists have varying opinions on numerous issues. These opinions may not be shared with Saradomin himself. Some Saradominists believe that there are only three gods, denying the existence of other gods/demi-gods. Others go as far to claim that he is the only true god in existence.

A statue of Saradomin as the Celestial Archmage.

Relationships with other gods[edit | edit source]

Before and during the God Wars, Saradomin frequently allied with the avian god, as many of their ideals were similar, such as desiring peace for the innocent. However, tensions did exist between the two, as Armadyl is more pacifistic and Saradomin strives for order at any cost. The two remain on somewhat uneasy terms, although peace remains between their factions.

Saradomin and Armadyl willing forged an alliance with the God of War in the hopes of bringing a swifter end to Zamorak, and pooled their powers to create the Godsword, hoping to slay the Mahjarrat deity. However, it is unlikely Saradomin held Bandos's warmongering ideology in any truly positive light, and whether he ever allied with him before or did more than purchase the Saragorgak goblin tribe from him is unknown.

The vegetable god sees Saradomin in a negative light following his unintentionally burning a dozen cabbages while teleporting into the garden of Edgeville Monastery. In turn, Saradomin looks at Brassica Prime in contempt, believing he has neither power nor followers.

As the god of balance and enforcer of his Edicts, Guthix was seen as both help and hindrance by Saradomin, as he kept him away from Gielinor and the influence he wished to have. Long before his arrival on Gielinor, Saradomin arrived on the homeworld of the Naragi, Naragun. When he demanded worship owing to his possession of the Elder Crown and the locals refused to bow down, Saradomin grew enraged and attacked many Naragi settlements. He later grew to regret this and then struggled to protect Naragun from Tuska but failed, resulting in its destruction. Upon the death of Guthix, Saradomin returned to Gielinor, going so far as to chastise Commander Zilyana for celebrating the death of the god of balance and revealing he had some respect for Guthix's ideology after all.

On Saradomin's personality, Guthix had the following to say in the God Letters:

Saradomin may truly believe that his motives are pure, and that he doth seek only order upon this land, but order cannot exist without the counterpoint of chaos to define that order.

I view Saradomin differently than he himself perceives things, and all I can see of his desires is the need for control; this is not a pure intention, and to mine eyes makes him little different from his brother Zamorak.

Saradomin holds a favourable view of the Menaphite god, respecting him as long as he does not interrupt his plans.

Similarly to Brassica Prime, Saradomin sees Marimbo in a contemptuous manner, referring to her as a 'drunken harlot'. Marimbo herself speaks of Saradomin as a 'stick in the mud', possibly because of his inability to avoid conflict with Zamorak, to whom she is equally opposed. It is possible, given Marimbo's past, that she humiliated him at some point.

The crystalline goddess is seen in a somewhat negative light by Saradomin for her efforts to cure the elves of the sickness she mistakenly cursed them with, believing she should spread her care to other races as well. At the same time, the two gods and their factions have never engaged directly in conflict with one another. Upon meeting her in person, they spoke and left on friendly terms, although it is possible Saradomin is afraid of both her and Zaros. Seren believes Saradomin is mostly benevolent because he believes in doing what he feels is right, but also holds the view that he has lost his way. However, she believes he can be redeemed of his past misdeeds.

Longer even than Zamorak, Saradomin has warred and disputed with Zaros, seeking territory, followers and artefacts from him. Saradomin greatly opposed and possibly even feared Zaros. Following Zaros' defeat at the hands of Zamorak, Saradomin played a key role in the Zarosian Extermination. Both he and Zamorak destroyed Zarosian settlements and culture; ordered the imprisonment, conversion, and deaths of many of his followers; and claimed Zarosian territory for themselves and their followers. Saradomin even founded the city of Saranthium on the ruins of Senntisten.

Following the return of the Gods, Saradomin was very cautious about Zaros, and warned the player to be the same. Nevertheless, Saradomin swore the Demon pact with Zaros prior to Sliske's Endgame in order to get his daughter Adrasteia, who was in Zaros' custody, back. After the loss of the Stone of Jas, Zaros initiated a plan to steal Saradomin's crown as well as "reclaim" most of the Temple Knights as his servants through the use of the Frostenhorn. Following the theft of the Elder Crown and most of the Temple Knights, Saradomin allied with Seren to directly oppose Zaros' plan.

Perhaps most famously of all, Saradomin is seen as the polar opposite of Zamorak, light vs dark, good vs evil, and order vs chaos. However, armies of the two gods have even co-operated on occasion to drive away a third party, usually Zarosian. Saradomin usually holds a zero tolerance policy for Zamorak, and vice versa, as is exemplified when they attacked each other in Lumbridge following the death of Guthix.