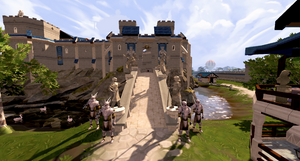 The entrance to the castle

The White Knights' Castle is the centre of Falador and base of the White Knights. If you have done Recruitment Drive, you can talk to Sir Tiffy Cashien and make the castle your respawn point. According to the novel Betrayal at Falador, the castle is protected by mysterious spells, strong enough to repel the Morytanian werewolf Jerrod, though in the present-day minor demons such as imps can access it with ease, as can all human players, regardless of their godly allegiances (even if one wore a Zamorak robe, one can still enter the castle). 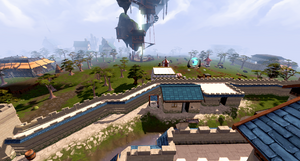 A view from the southern balcony

The statues of some heroes from While Guthix Sleeps