Perjour (pronounced /pɜ:ʳʒʊəʳ/) was a scholar in the service of Zaros, first mentioned in the lore Twice Burnt. He was bound to a book that magically transcribed everything he saw, heard and thought, which Zaros would read after every mission he sent Perjour to witness.

Zamorak cast a spell on the book while they were watching Char's performance when she was a dancer, which altered the spell Zaros had placed on it, duplicating the book into Zamorak's possession, so Zamorak could read what was being reported back to Zaros. When Perjour was taken with Zamorak, Viggora, Thammaron, Enakhra and Char on a mission, Zamorak altered the spell again, causing the book to show a different version of events, hiding many occurrences. This alteration was made to help him overthrow Zaros with the Staff of Armadyl, as Zaros would not know of Zamorak's actions, enabling him to plan unhindered.

Perjour was later present during Zamorak's betrayal of Zaros, as seen during Children of Mah, where his nerves caught the attention of Kharshai. When asked by the inquisitor, he claimed to have been sent by Zamorak, who could not divert from his mission, and handed over his book when asked. Kharshai saw nothing suspicious in the book however and let Perjour be, unaware that Zamorak had the real book in his possession.

Search for the Kiln[edit | edit source]

Perjour died in the caves leading to the Elder Kiln, as it shown in the Journal of Perjour, obtained during The Elder Kiln quest. During his last writings, Perjour stated that he was searching for the Kiln in attempt to raise an army for Zamorak. It is likely that he made contact with the TzHaar, but this contact was limited at most. Perjour had explored tunnels that the TzHaar had abandoned for thousands of years, now occupied by other creatures. He was able to decipher the TzHaar's counting system, but in one of these instances, he was mortally wounded by a "brute" and eventually died in the tunnels. His final words state that he believed Char had died.

In the year 169 of the Fifth Age, the TzHaar sent an adventurer to find the Elder Kiln, which they had believed to be a legend. The adventurer traveled the same tunnels Perjour had, eventually finding his charred skeleton and his journal, which would prove helpful in unlocking the sealed doors up ahead. 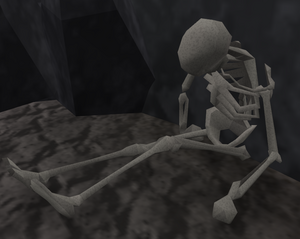 Transcripts Perjour is the author or co-author of: