From the RuneScape Wiki, the wiki for all things RuneScape
Jump to: navigation, search
For the achievement, see Solak (achievement). 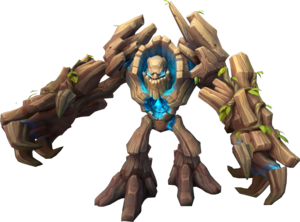 Solak, the Grove Guardian is one of the Guardians of Guthix and can be fought at The Lost Grove. He is one of the most powerful monsters in the game. His drops include tier 92 dual-wield blightbound crossbows, Erethdor's grimoire, and his boss pet, Solly.

The battle can be started by talking to Merethiel who is found in the centre of the Lost Grove. Doing so creates an instance where Solak will be waiting to be challenged. During the fight, Merethiel assists players by performing vital roles for the team.[1]

The fight with Solak scales with the number of players, scaling with a minimum of 2 (for solo and duo encounters), and capping at 7. The mechanics and life point thresholds change across team size.

Defeating Solak is required for The Reaper title. Additionally, the [Name] the Guardian of the Grove title is achieved from obtaining all drops from Solak's collection log.[2]

Solak is a creature of the Anima Mundi, like Vorago and Telos. [3] He defends the Lost Grove from those who want its power. He is referred by the inhabitants of the grove as a "Walker". Guthix learned of the existence of the Lost Grove, and upon arriving, made Solak a Guardian of Guthix.

Solak was tasked in protecting an island that is inhabited by smaller creatures of the Anima Mundi. During the Second Age, Seren sent four elite elf warriors - Erethdor, Merethiel, Faerdhinen and Saeldor to aid Solak in his task. Erethdor soon learned of the heart of the tree, a power that he wanted to claim for himself. He attacked Solak in a bid to claim the power he guarded, but was defeated through the combined efforts of Solak and his own siblings. In the end his body was destroyed and his mind split in two; one half was bound within Solak himself and the other half within a stone that is currently in Merethiel's possession.

After this battle, Solak knew that he was becoming tainted and told the elves to leave and inform Seren of Erethdor's betrayal. He then sealed the Grove to prevent Erethdor from abusing its power. The fairies tried everything to contact him, along with humans building temples to worship him; however, the religion died out as he never responded. [4] The Grove would not be in contact with the outside world until the fifth year of the Sixth Age. By this time, Erethdor had gained complete control of Solak, with the Guardian being mentally weak and no longer able to resist him after thousands of years of keeping him at bay.

With the reemergence of the grove, the World Guardian explored the island, finding and allying with Merethiel and a group of adventurers to release Solak from Erethdor's control. Erethdor battled the team with Solak's body and all of his powers at his disposal, further enhanced by his own blight magic, but despite his newfound powers, the team were slowly able to push Erethdor out of Solak's mind. Once weakened enough, Merethiel was able to send several members into Solak's mind, where they found a fragment of Erethdor who immediately attacked the intruders, but they were able to defeat him, causing him to lose even more control. Upon defeating this half, Erethdor split himself into multiple manifestations to destroy what little remained of Solak's conscience in a last ditch attempt to fully control his body, but the World Guardian and their allies managed to stop them from completely destroying Solak and defeated his body, finally freeing Solak from Erethdor's control.

After the battle, Merethiel expressed guilt at what her brother did and her failure to stop him, but Solak, now freed from Erethdor's influence, reassured her that she was not to blame for her brother's mistakes. Solak and Merethiel then agreed to work together to undo the damage Erethdor caused to the Lost Grove, thanking the World Guardian and their allies for their efforts.

If the player enters Solak's arena with a grimoire that has already run out of charges, the player will neither be able to activate the grimoire nor benefit from the restorative effect of Solak's arena.

If a team successfully completes the kill, any players who died can claim loot from Merethiel outside the instance as long as they remain logged in on the same world. However, no killcount is awarded when loot is claimed this way.[5] Drop rates are the same across all team sizes.

Like Nex: Angel of Death, player drops are completely independent of each other, so it's possible to get multiple unique drops from one kill. If the player's inventory is full, then the items are sent to the bank.

Every player is guaranteed a drop from the primary table. Rolls are also made for secondary and tertiary drop tables.