From the RuneScape Wiki, the wiki for all things RuneScape
Jump to navigation Jump to search
The Old School RuneScape Wiki also has an article on: osrsw:God Wars
This article is about the series of battles that took place on Gielinor during the Third Age. For other uses, see God Wars (disambiguation).

The God Wars were an unimaginably extensive series of battles and conflicts covering the entire Third Age, a time of great calamity in Gielinor. They are the second known God Wars in history, and the first to rage on Gielinor. Although, over thousands of years, they still have had a major impact on modern day life in nearly all sites of Gielinor and are of great interest to archaeologists. A small faction of creatures from the wars can still be found battling for the godsword in a recently thawed out dungeon in the north, having been frozen in time. 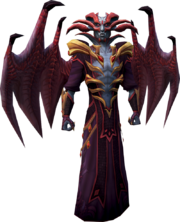 Zamorak, the initiator of the God Wars 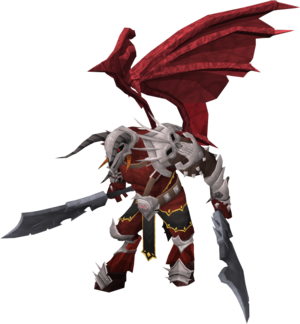 The God Wars bred many monstrosities such as K'ril Tsutsaroth, a demon summoned by a Zamorakian Mahjarrat that was thought for years to be only a legend.

Saradomin, one of the most active fighters during the God Wars

During the Second Age, Zaros had almost complete domination over the world. The areas that are now the Wilderness, northern Misthalin, northern Asgarnia and north-western Morytania formed the greatest part of his kingdom, and cities were constructed. When he was betrayed and defeated by his Mahjarrat general, Zamorak, the Second Age ended and the other gods began ruling without interference. However, many gods, especially Saradomin and Zamorak, wanted complete control.

During Ritual of the Mahjarrat, Saradomin states that when Zamorak had returned from his banishment, he wanted to repossess the Stone of Jas, which Saradomin confiscated after Zamorak was banished.

After Zaros's banishment, Zamorak quickly rounded up most of Zaros's remaining loyalist followers and destroyed what traces remained of him in an attempt to erase Zaros from history. The majority were destroyed quickly except for Senntisten, which held out for many hundreds of years. The war escalated as other gods, seeing an opportunity, attempted to seize control of previously Zarosian areas. Zamorak was unable to efficiently conquer and maintain his holdings due to the speed with which he acted. The war further intensified, and by the time of the Fall of Hallowvale, almost the entirety of Gielinor was in chaos. The gods, at the time, could directly interact with the world, which caused destruction far beyond any that had been seen before or after the Wars. Seren, however, chose not to participate in the wars.

During the Wars, countless civilisations, races, and animal species disappeared. Many were destroyed, while others hid themselves or underwent drastic changes in order to survive. Much of the world itself was mutated; once healthy lands were ruined or reformed. Most of these changes were so devastating that they continue to affect Gielinor today.

Sometime near the end of the Third Age, Saradomin managed to make an alliance with both Bandos and Armadyl, where the three gods and their forces were able to overwhelm Zamorak in Forinthry. Zamorak stated that he would have negotiated his way out, but this was impossible due to Saradomin, who had effectively commuted him a death sentence. Due to this, Zamorak drew power from the Stone of Jas in an attempt to kill them with the power that they desired, but this did not work as intended, instead scorching almost all of Forinthry and killing all in those lands, who were warped into revenants, cursed to roam the forsaken land for all time.

As a result of Zamorak's misuse of the Stone of Jas, the Anima Mundi cried out in pain, causing Guthix to awaken from his slumber from the start of the First Age. Guthix assembled his own forces to bring balance back to Gielinor, and ordered the gods leave, after having caused so much destruction. They refused however, as they wanted to keep their influence on Gielinor, so Guthix established his Edicts, planting a sword with mysterious inscriptions at the Wilderness Volcano, which prevented the major gods from ever setting foot on Gielinor as long as it stood, and kept it hidden from those who were unaware of its existence. Despite being physically banished, the gods could still see and hear the prayers of their faithful, and could still manipulate their followers from afar.

Bandos, one of the God Wars combatants 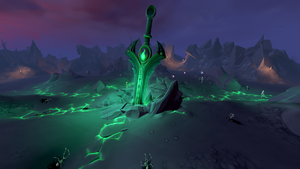 Guthix's warning in the Wilderness

However, an even more hindering factor are the differences in accounts of the Wars. Saradominists and Zamorakians often disagree on what truly occurred at the time. For instance, Saradominists such as the Wise Old Man state that when victory was nearly Saradomin's, he pitied the Zamorakians and allowed for a truce to be made. Zamorakians, however, insist that this was not the case, and have their own beliefs on the matter. Most now accept that it was actually Guthix who ended the Wars.

Another difficult subject are the Edicts of Guthix, which were created by Guthix when he ended the Wars. Some religious groups doubted their existence. Others, however, including many important religious advisors such as Aeonisig Raispher, highly encouraged the following of the Edicts. This makes understanding them difficult, and has been the cause of many political disputes since their creation.

Every race, god, and civilisation of RuneScape was forced to fight in the God Wars at some point. While some fought constantly in the wars, others were quickly destroyed or hid themselves. Below is a partial list of significant individuals that fought in the war, although there were many more whose names have been forgotten or are who played a somewhat lesser role than those listed here.

There had been a countless number of individual battles and skirmishes over the course of the Third Age; many have been lost to time. The details of the more impactful battles are well recounted and listed below. Please note that these events may not be in complete chronological order. 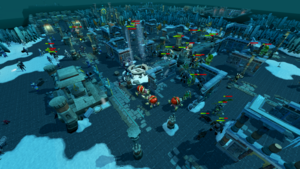 The God Wars Dungeon, where one of the God War's battles still rages on today

The God Wars also had a profound impact on its participants and Gielinor's environment. These events are in no particular order. 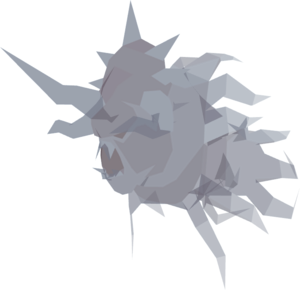 A revenant dark beast, long since perished in the God Wars.

The God Wars were a bloody time marred by battles. Because the land was ever-changing from the constant battles which plagued its surface, there were only a few long-standing cities. Occasionally large camps would be created, but rarely did any significant settlement survive for long.

Because of this, the battles of the God Wars were more violent and bloody than any other. Everyone was pushed to fight; there were very few "civilians". The majority of battles were battles held on open land with make-shift defensive structures placed to protect soldiers. While some armies made use of strategy and cunning tactics to overcome their foes, others chose brute force. Followers of Bandos in particular were known for their strength and brutality.

Armour such as Third age armour was used often in the God Wars. Far stronger than most armours used today, its resilience made it the equipment of choice for those that could create it. What it is made from, depending on class is white dragonhide, enchanted silk and enchanted silver but where it came from is unknown; the knowledge of how to create this equipment was lost long ago. This armour is crafted so well that it can still be used today, and is highly prized among those with the funds or the skills to obtain it.

Siege weaponry was used primarily during the beginning of the Wars, although it was utilised at times later into the Third Age. To eliminate the remaining settlements, soldiers made use of battering rams, siege ladders, and other such equipment.

Prior to RuneFest 2017, Jagex created an internal document regarding the Military Forces of the Late Third Age. Whilst the original purpose of this document was for the Before The Wilderness expansion[1], it was also used as a basis for Archaeology lore. 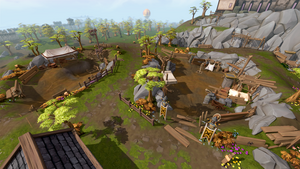 The God Wars continue to have an impact on Gielinor today. Many of the lands that were seized by certain races in the God Wars are still under their rule today. Many areas, such as the Feldip Hills and Morytania continue to be affected by their roles in the Wars. The Wilderness, in particular, has remained virtually unchanged, apart from an attempt to recolonise in the Fourth Age, which failed.

The spirits of those that died during the God Wars in the lands once known as Forinthry (now the Wilderness) were unable to move on. Strange and twisted magics forced their souls to remain in the barren wasteland as revenants, who would attack all in their path. The revenants were eventually banished into an underground complex after numerous adventurers banded together; while their powers are mostly diminished, they are still aggressive and quite powerful.

The God Wars also serve as a historical reminder to the rulers of the modern age. Since the Edicts of Guthix were put in place, there have continued to be countless battles; indeed, the Fourth Age was a time of great violence between the world's races. The only thing that has prevented this from escalating into all-out wars are the Edicts, which prevent large-scale attacks between different races and religious factions. Rulers must be careful to abide by these. For instance, King Roald III of Varrock had faced a difficult situation; the werewolves of Morytania have begun to kidnap travellers near the Paterdomus to appease the blood tithes of the vampyres. However, he could not launch a full-scale assault, as doing so could result in another God War and the destruction of the world. Some wished to circumvent the Edicts or remove them completely, including a number of splinter groups currently operating near the Paterdomus temple, but they were eventually expelled in Year 169 of the Fifth Age. The God Wars could be seen as Gielinor's equivalent of nuclear war in the real world, with no apparent victor yet many losers.

Excavations are also being performed in the search for relics from these ancient times. This is a difficult task, however; the God Wars occurred over 4000 years ago, so nearly all of the artefacts from this time have been destroyed. Furthermore, there were few permanent structures during the time, leaving us with little understanding of the architecture, literature, or any other cultural aspects of the age. Fortunately, there is a considerable amount of armour that has survived within the earth, and in some areas pottery and other such relics can be found. The largest excavation currently under way is being performed by the Varrock Museum at the Varrock Dig Site, which was once the Zarosian capital of Senntisten (and later Saranthium). Other, smaller, digs are also under way, such as the one performed by the Dorgeshuun. Recently, they discovered a large number of artefacts from the Dorgeshuun civil war while they were helping the dwarves to build the Dorgesh-Kaan - Keldagrim Train System.

Along with the artifacts found from these sites and those below, revenants somehow ended up in the possession of various equipment and artefacts used during the Third Age. Adventurers brave enough to battle the vengeful spirits could make off with these rare items, the former being popular amongst warriors and the latter for collectors.

On 30 March 2020, the Archaeology skill was released into the game, which featured five dig sites on release: Kharid-et, the Infernal Source, Everlight, Stormguard Citadel, and the Warforge. The underlying theme which connects the five of these dig sites is the God Wars and their existence throughout the Third Age.