From the RuneScape Wiki, the wiki for all things RuneScape
Jump to navigation Jump to search
Loading...
NPCCombat
Char? (edit) 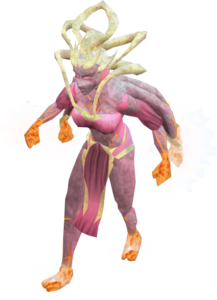 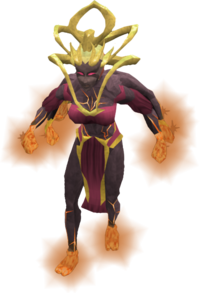 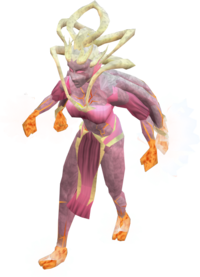 Char is a fire enchantress in the service of Zaros. She is of, and believed herself to be the last of, the Auspah race, originally inhabited by the village of the same race. She is first introduced in the Lore story Twice Burnt and has her story expanded in the quest, The Firemaker's Curse, where she serves as the antagonist of the quest.

Like the rest of her people, she is capable of creating and controlling fire.

Char is fight-able as a class X1 boss monster in the Dominion Tower minigame if the player has completed The Firemaker's Curse.

Her village was attacked by barbarians who thought they had powerful artefacts and her race was almost entirely destroyed, leaving only some of them alive, serving the barbarians with their useful firemaking ability and Char, a child in that time, was left barely alive on the battlefield since the barbarians thought she was dead.

A week after the barbarian attack, Char was found by a Zarosian group, who took her in and raised her as their own. As a follower of Zaros, she first found work as a dancer, with performances great enough to catch the attention of Zaros himself. He then enlisted her into his forces, using her skills in battle.

Char was sent with Zamorak, Thammaron, Viggora, Enakhra and Perjour to raid a Fremennik coastal village. While the others planned the attack, Char was left to tend the horses, at which time she was captured by a barbarian raiding party. In the village she found that there were others of her people there, chained to rocks and forced to catch rock crabs and cook them with their powers. Seeing that, she became enraged and destroyed the village and killed all of the barbarians in a violent fashion. It is unknown what happened to the Auspah that were serving the barbarians with their powers after that.

It is revealed by Perjour, in his written account of the incident, that there were rumours of Char being the concubine of Zaros; these rumours are, however, unsubstantiated.

When Zamorak had planned out his usurping of Zaros, he needed to remove some of Zaros' strongest followers. Being able to hide his true intentions from the Empty Lord using a duplicate journal of Perjour's, he, Char and several others were sent to investigate Seren's elven troops in the west. Char was suspicious of both the mission and Zamorak, but complied with Zaros' orders.

The party was soon ambushed by a large party of elven outriders. In the middle of battle, Char turned to see Zamorak calmly approaching her. She had expected his betrayal, but not in the middle of the fight. Zamorak stabbed Char with a poisoned dagger; he did not intend to kill her, but simply prevent her from coming to Zaros in his time of need. Char stumbled away into an underground cavern, wrote down some journals and went into a magical sleep, eventually purging all of the poison from her body, waiting for Zaros to arrive and rescue her; as such, she was not present during Zamorak's betrayal.

This betrayal caused Char to resent the Mahjarrat, although she made a lone exception for Azzanadra, who she considers to be a true, loyal and brave follower. [1]

The following takes place during The Firemaker's Curse.

In year 169 of the Fifth Age, Char is encountered by the adventurer when they meet a group of firemakers who had a dream of long-lost firemaking knowledge in the caves that she resides in, having left journals behind that would reawaken her power. When the first journal was grabbed, Char woke from her slumber and believed that Zamorak had returned, but soon realized the group she sensed were humans and that Zamorak's betrayal was a success. [2] Intending to show the group what she had felt for thousands of years [3], she possessed Emmett, and had him kill Phoenix.

Char allowed the group to pass by her caves and obtain knowledge, but at every camp she would extinguish their fire and possess a random member of the group. Interested in the adventurer, she informs them that they will decide who she has possessed, and if they guessed wrong, she would kill one of the firemakers. As they passed through the rooms, Char slowly regained her power, impressed with the adventurer's ability to complete her puzzles. She also learned that Zamorak had ascended to a god, lamenting her failure to protect Zaros. [4]

Upon reaching the last journal, the group requested the adventurer bind all of them, as it was likely she had something planned. Char revealed her true form, challenging the adventurer to ensure that her knowledge was in the right hands. [5] The adventurer was forced to use their firemaking skill to combat her, but after a long fight, she was eventually defeated. Char admitted defeat, allowing the group to leave and offer them knowledge if they wished to return to atone for her acts, as she had acted rashly. [6]

Char sealed the entrance to the caves, although she left the exit open for the adventurer to return for firemaking training, while she continued to hone her skills to bring back Zaros and get her revenge on Zamorak.

If the Temple of Senntisten was completed (and before Fate of the Gods), Char will learn from the adventurer that they had worked with Azzanadra, prompting her to ask how they knew of his name, and why they didn't tell her. [7] The adventurer told her that she was too busy trying to kill them at the time, prompting Char to remark that his followers were returning and being restored, but refused to divulge the identity of the others or the plan they would have. 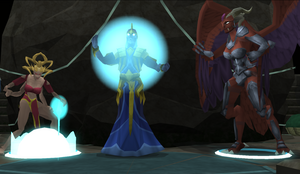 Saradomin returns to Gielinor during The World Wakes right after Guthix's death and teleports Nex back to her prison and Char back to her cave.

Char's recovery was noted by the Zarosian Mahjarrat, who took her and Nex to Guthix's resting place. The Mahjarrat had intended to bargain with Guthix so that they could bring Zaros back, although Char believed that it would have been better to simply kill him instead. If the adventurer sided with the Guthixians, Char launched flame vortices at the adventurer to prevent them from reaching Guthix, although her attempts to stop them failed. Following Guthix's death by Sliske's hands, Saradomin was the first god to return, who immediately teleported Char back to her cave.

The following takes place during Fate of the Gods.

Char in Fate of the Gods

With Zaros obtaining another corporeal form thanks to the World Guardian, he immediately assembled his most loyal followers into a mind threshold. Char was present in the meeting, along with Azzanadra, Nex and Sliske, where she witnessed him dismiss Sliske for his actions; this in turn caused her to wonder if Zaros would have excommunicated her for killing Guthix, although it would be unlikely, as she appeared to be unaware that Sliske had further plans. Char was ordered to keep an eye on the now-excommunicated Sliske and to attempt to discover the locations of the Staff of Armadyl and the Stone of Jas for Zaros, should Sliske let them slip.

If Zaros was given a dark simulacrum, Char states that her fire grows brighter, while if he was given a light one, she warns the World Guardian that they are playing a dangerous game. [10]

When Sliske called on the gods for his endgame, Char was part of Zaros' entourage, along with Azzanadra and Vindicta. While traversing the labyrinth, she got into an argument with Azzanadra on how best to deal with Sliske; she wanted to kill him, while Azzanadra believed that Sliske could redeem himself. Sliske taunted her, claiming that Zaros had known where she was following her betrayal by Zamorak, though Zaros denied this claim.

The following takes place during Battle of the Monolith.

Alongside Azzanadra and Nex, Char led the Zarosian attack against the Varrock Dig Site blowing the Frostenhorn as the Zarosians charged. She initially fought Saradominists, Crux Equal and Serenists, but changed to fight shadow creatures after Zaros opened the Codex. The fighting left her tired, but with the aid of the TokHaar, they were able to repulse the monsters. Char then stood next to the Codex and blew the Frostenhorn in victory; however, due to the nature of the artefact, it amplified the residual shadow anima, sucking her inside into Erebus.

Char serves as the boss of The Firemaker's Curse quest. However, the boss is safe, meaning that if you die, you will not lose your items.

Char's hits are based on the player's maximum life points, so wearing items that boost life points will only cause the player to take more damage. The damage done to Char by the player depends only on the number of fires that have been lit using the pitch can: about 100 damage for each fire.

Char transforms into a six-armed, giant version of herself.

Transcripts Char is the author or co-author of: