The Dungeon of Disorder (also known as the Dis dungeon) was the secret base of operations for the ancient Zamorakian demon cult, the Order of Dis, at the turn of the Third Age. The dungeon's ruins lie under the Star Lodge cellar, and form part of the Infernal Source dig site, located outside the northern gates of Varrock, next to the current Jolly Boar Inn. It is first accessible to the player with level 24 Archaeology after using 3 crests of Dagon on the fireplace of the Star Lodge's cellar. The Dungeon of Disorder ultimately leads to the Source.

The following information is detailed in the founder's journal pages and cultist's diary pages, found at the Star Lodge and Dungeon of Disorder's excavation hotspots, respectively.

The founder and first hierophant of the Order, Duchess Philippa Wharton, speaks of the dungeon as the base for the reconstruction of a 'gate' that once was located on the northern outskirts of Senntisten. The members of the order were first tasked with breaking down the ruins of the original gate and transferring them, piece by piece, to the dungeon to be gathered before ultimately being sent to the Source through a ritual circle. After the construction, the dungeon was primarily used to imprison kidnapped victims who were forced to accept 'gifts' from the Source or be sacrificed to the demon Dagon. It is thought that these gifts were in fact Avernic demons, who were summoned through the Source from their homeworld, Infernus, to aid in the collapse of Senntisten.

After Zamorak's return at the start of the God Wars, the dungeon fell into abandon, as other routes to the Source were established and the Order of Dis was no longer needed. Nonetheless, caretakers remained to maintain the ritual circle and connection to the Source until the inn above presumably collapsed. The buried dungeon would remain hidden until the Sixth Age, when Movario learned of its location and invited the player to help, as his former guard Darve refused to help. 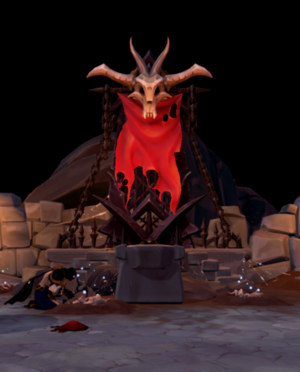 The first area features a sacrificial altar, with a hand of glory (the preserved hand of the Order's cult leader) on display that may be picked up and combined with a Ring of Luck to yield a Hand of Glory (Ring of Luck), which may be offered to the mysterious monolith at the Archaeology Campus.

The dungeon, or torture chamber, is accessed by taking the tunnel out of the sacrificial altar and features three Dis dungeon debris hotspots, which may be excavated with level 45 Archaeology to obtain additional materials and artefacts:

The dungeon also features various bookshelves that may be searched to find the cultist chores rota, which awards 500 Archaeology experience.

The cultists' living quarters are located farther down the tunnels and contain six cultist footlocker hotspots, which may be excavated with level 29 Archaeology to obtain the following materials and artefacts:

In addition to the hotspots, the living quarters also contain two Eye of Dagon material caches and the tunnel just outside features a materials cart to store excavated materials. The bookshelves in the cultist footlocker may also be searched to find the books 'Amor Dente' and 'Malum Infernale', which yields 500 Archaeology experience each. 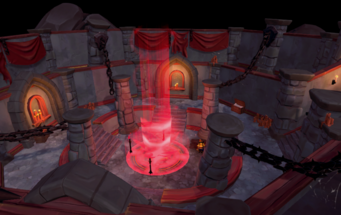 The completed ritual circle at the end of the mystery, having opened the portal to the Source.

The Dungeon of Disorder features one mystery, where the player restores the ritual circle and reopens the portal to the Source. The player may solve this mystery by first collecting all four of the cultist's diary pages, which reveals the incantation required to open the portal. The boxes of chalk and red candles in the room are also used to complete the circle.

The Dungeon of Disorder also features an opportunity for special research. The player may enable this particular research assignment by examining the sacrificial altar.

This information has been compiled as part of the update history project. Some updates may not be included - see here for how to help out!
Retrieved from ‘https://runescape.wiki/w/Dungeon_of_Disorder?oldid=35793017’
Categories:
Hidden category: