The Taverley Dungeon is the fourth largest dungeon in RuneScape, surpassed by Brimhaven Dungeon, the Chaos Tunnels and God Wars Dungeon. There are many monsters, ranging from low to high combat levels and with the stronger ones located deeper in the dungeon. These include poisonous monsters, so bringing Antipoison potions is advised.

Because the Taverley Dungeon was the only members-only dungeon when members was released, it was formerly known as the Member's Dungeon.

Location of the Taverley Dungeon 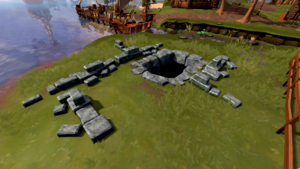 The entrance to the caverns

The entrance to the dungeon is found south of Taverley and west of Falador. After the update Troll Warzone, it was relocated closer to a bank - directly south of the dock past the bridge by the wheat patch. (The boat carries to Daemonheim, and from there to Al Kharid or back to Taverley).

The dusty key is required to access the deeper areas of the dungeon and to access the long route to the water obelisk. To obtain it, go through the dungeon headed south to Kinshra (Black Knight) headquarters. Go into the narrow eastern passageway, kill the Jailer (level 39), get the Jail key he drops, use it to open the door of the jail cell and talk to the prisoner Velrak the Explorer to get the dusty key. After completion of the One Small Favour quest, players can add the dusty key to their steel key ring.

Players will not get the dusty key if asking for a reward. If this is done, talk to Velrak again and choose the other conversation branch. Velrak does not leave the cell, however, after receiving the key if you speak with him again he will want to flee from the dungeon and in doing so will be located at the entrance of Taverley Dungeon. If the key is lost, another one can be obtained. You can use the drop trick to get more than one key at once.

The dusty key is not tradeable, but it can be purchased in the Legends' Guild shop. A dusty key always spawns deep in the dungeon near the lava eel fishing area. Since this is in the area behind the gate, only players with level 70 Agility can get the key by using the shortcut to the blue dragon area and going south to the lava eel area. 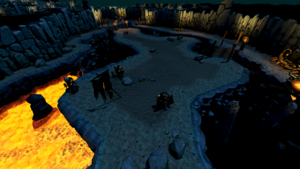 Chaos dwarves and venomous scorpions hanging around by the lava 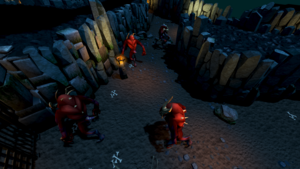 Several demonic inhabitants of the dungeon 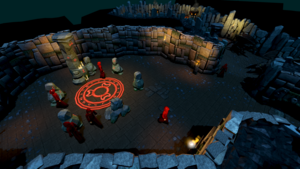 The last bit of the dungeon, with black dragons and a Zamorakian shrine