From the RuneScape Wiki, the wiki for all things RuneScape
Jump to: navigation, search
Not to be confused with Broom Staff or Broom.
Broomstick? (edit)

A player flying with a Broomstick

A player sweeping with a broomstick

The broomstick is an item rewarded by Maggie after the completion of Swept Away. During the quest, she asks players to enchant it by bringing it to three witches: Hetty in Rimmington, Aggie in Draynor Village, and Betty in Port Sarim. Note that Hetty does not enchant the broom, but provides broom ointment so that players can enchant it themselves. If destroyed, it can be reclaimed by talking to Maggie west of Draynor's lodestone.

After completing Swept Away, the broom can be presented to a number of other prominent witches across Gielinor for a new teleport option to the Sorceress's Garden and one-time Magic experience rewards. Presenting the broomstick to each witch is a requirement for the Advanced Sweeping achievement, trimmed completionist cape, and master quest cape.

The broomstick can be wielded in the weapon slot. Its attack options are the same as if a player was unarmed. In addition, the broomstick may be used in a "sweep" emote. To do this, there is a left-click option on the broom called "Sweep". 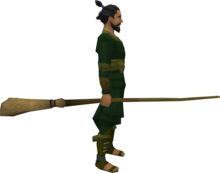 Followers cannot be taken on a broomstick flight.

Trying to teleport to the Sorceress's Garden in free-to-play worlds gives a message of "You need to be on a members' world to use this item." instead.

You can teleport to the garden without wielding the broomstick, by right-clicking on your broomstick in your inventory and clicking "teleport".

With the indicated minimum Magic level, talking to Ali the Hag in Pollnivneach, the Old Crone near the Slayer Tower, Baba Yaga on Lunar Isle, or Kardia in the Underground Pass will give a one-time Magic experience bonus when the broomstick is wielded. To get into Kardia's house, you will need to pick-up her cat located to the north of her house and use it on the door. Once she is distracted, open the door and use the broom on her. Check the quest section for more detailed instructions.

It is possible to use a Magic level boost to get the Magic experience from each person. The God Emissary banner boost does not count as a boost for this content.