From the RuneScape Wiki, the wiki for all things RuneScape
Jump to navigation Jump to search
The Old School RuneScape Wiki also has an article on: osrsw:Baba Yaga
Baba YagaMysterious mage? (edit)? (edit)

Baba Yaga is a member of the Moon Clan on Lunar Isle who lives in a house that walks about upon chicken legs. The house is named Berty. She is admittedly insane and runs Baba Yaga's Magic Shop which sells runes, battlestaves, and Moonclan manuals. In order to talk to her or most other NPCs in the city, the seal of passage is needed during the quest Lunar Diplomacy.

Baba Yaga can teach a player the Ourania Teleport spell after they have completed the Lunar Diplomacy quest. She will recount a tale and then whisper the spell to the player. Players need to have Lunar spells activated to be able to coax Baba Yaga into teaching them the spell. If spoken to without a seal of passage, the player will be teleported away to Rellekka, during the quest Lunar Diplomacy.

After the quest Swept Away, she can enchant the broomstick, and players will receive 10,338 Magic experience if they have a Magic level of 73 or above.

There is a Construction skilling pet called Baba Yaga's House, based on her house. 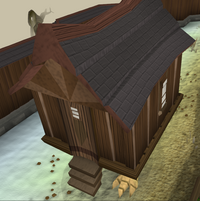 During the quest Glorious Memories, when players show Brundt the Chieftain the unfinished astral rune, Brundt will remember more about the day he sought with friends a prophecy tablet and how Baba Yaga offered her assistance.

After the quest, players may bring her the unfinished astral rune to receive a further reward and learn more about the events of that day. 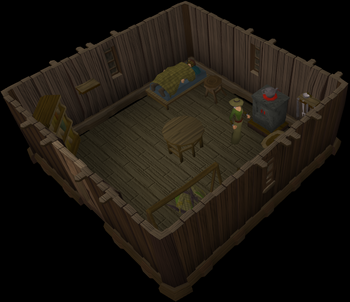