Sceptre of the gods

From the RuneScape Wiki, the wiki for all things RuneScape
Jump to: navigation, search
Sceptre of the gods? (edit)

The sceptre of the gods is an item that may be received when playing Pyramid Plunder.

There is a chance to obtain one by looting the engraved sarcophagus in the 8th room of Pyramid Plunder, which requires level 91 Thieving and 75 Runecrafting. The odds of finding the sceptre are 1/625, which is increased to 1/480 by wearing either master camouflage outfit or at least tier 3 luck ring.[1]

It only provides boosts when wielded. When one is looted, the player will be ejected from the pyramid.

In addition, when wielding this sceptre in Pyramid Plunder, players receive the following benefits: 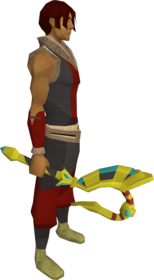 When there are no teleports left, the sceptre can be recharged, thereby charging it with 10 (20) more teleports, by speaking to the Guardian mummy in the Pyramid Plunder pyramid. It is recharged in the same way as the pharaoh's sceptre. The mummy will recharge it in exchange for any of the following reward items from the minigame:

Note: With the Jewelled diamond statuette it is not required to speak to the Guardian Mummy, the item can be used on the sceptre to recharge it.

The following table shows the total cost of recharging the sceptre of the gods by buying ornaments from Grand Exchange. This table assumes you recharge your sceptre with only one type of ornament. Note as usual, GE indicative price is not always the price that items are available for. The table also shows the value of the ornaments with Simon Templeton. Sometimes Simon will purchase these ornaments for more than their Grand Exchange value.