Players can only make and keep one skull sceptre at a time. A new skull sceptre can only be made once the old skull sceptre is either lost or destroyed. If a keepsake key is used on the sceptre, another one still cannot be assembled. There is no limit to how many strange skulls or runed sceptres a player can own. Having a sceptre in the bank or inventory does not prevent more parts from dropping.

Parts of the sceptre are rare drops from the monsters listed below, all located on various levels of the Stronghold of Security. In addition, wearing any Varrock armour gives an increased chance overall of receiving a sceptre part drop. 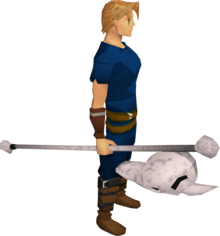 Where to find the pieces[edit | edit source]

If players already have a skull scepture, they cannot create another one. However, they can create more strange skulls and runed sceptures as well as keep multiples of the component parts.