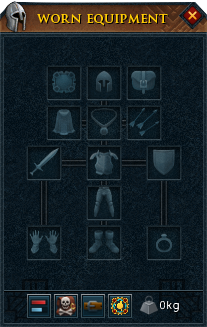 When items were equipped, players used to have the option to Operate them regardless of them having a secondary function or not. For items that did not have a special function, the player would receive a message saying, "That item cannot be operated," when they attempted to do so. After an update, if an item could be "operated", the option to do so would appear in the equip screen (although with the name of the ability rather than "operate"). In the case of an item which does not have this function, no extra right click selection will be available.