From the RuneScape Wiki, the wiki for all things RuneScape
Jump to navigation Jump to search
The Old School RuneScape Wiki also has an article on: osrsw:Sorceress

Aadeela is a sorceress found on the 1st floor[UK]2nd floor[US] of her house, at the south-easternmost point of Al Kharid near Shantay Pass. She grows sq'irks in the Sorceress's Garden.

She used to be good friends with Osman, the spymaster of Al Kharid. However, their relationship soured and she stopped supplying him with the sq'irks Osman enjoys.[1][2]

When talked to, she demands to know what adventurers are doing in her house. If threatened or spoken to rudely, she teleports the intruder out of her house. If they attempt to convince her to give them sq'irks, she casts a truth spell that reveals their intent. 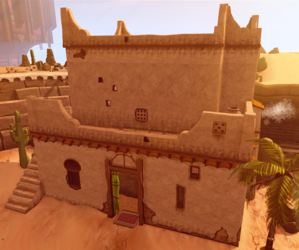