From the RuneScape Wiki, the wiki for all things RuneScape
Jump to navigation Jump to search
For the 2017 Hallowe'en event ring, see Ring of kinship (2017 Hallowe'en event).
Item JSON: {"edible":"no","disassembly":"no","stackable":"no","stacksinbank":"yes","death":"never","name":"Ring of kinship","bankable":"yes","gemw":false,"equipable":"yes","members":"no","id":"15707","release_date":"12 April 2010","release_update_post":"Dungeoneering Skill!","lendable":"no","destroy":"You can get a new one from the Dungeoneering tutor outside the castle at Daemonheim.","highalch":false,"weight":0.004,"lowalch":false,"tradeable":"no","examine":"This ties you to your allies and enables party configuration in Daemonheim.","noteable":"no"} 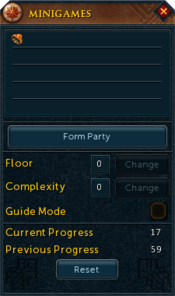 The ring of kinship is an item used to create parties for exploring Daemonheim with the Dungeoneering skill. It provides an unlimited number of teleports to the peninsula, along with numerous other uses including the ability to enter the dungeons, view Dungeoneering party details and customise the ring to apply various combat and non-combat classes. The ring is given to the player by the Dungeoneering tutor at the entrance of Daemonheim and is one of the few items that players are permitted to take into the dungeon from the surface.

Alternative methods of arriving at Daemonheim are:

The ring of kinship's teleport will not work beyond level 20 Wilderness.

Each party of players is linked by a ring of kinship which allows the player to form, join, and manage a party. There is also a room in Daemonheim which allows players to have a party selected at random for them.

To form a party, the player must click on the "Form Party" button in the party interface. Once the party is formed, the player may invite other players to the party or leave the party (so others can invite the player). There are options to change the floor number and complexity level, and another to toggle Guide Mode on or off. It also shows the player's current progress and previous progress.

There is also the option to reset progress. When your progress has been reset, you will keep your current prestige, which will give Dungeoneering experience from this prestige when completing dungeons again. 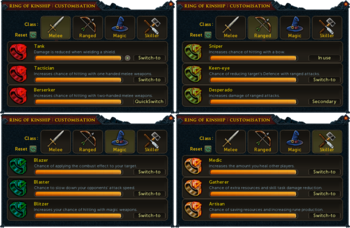 Members can customise their ring by purchasing class upgrades with Dungeoneering Tokens while within Daemonheim. There are twelve possible classes, and only one may be active at a time. However two classes can be activated if you have done at least the Easy Tasks of the Daemonheim set. In order to take advantage of the upgrades, players must wear the rings.

If a player dies outside of Daemonheim with the ring, the player can regain it from the Dungeoneering tutor for free. The ring will not lose its upgrade, and the tokens spent on upgrading the ring are not wasted.

An upgraded ring of kinship does not have any boost in a F2P world.

With the release of the Daemonheim achievements on 10 September 2013, a secondary class can be selected after completion of the easy tasks, from the "secondary" section when accessing the "customisation" interface. Players are able to right-click the "switch-to" settings and select "secondary".

When the ring of kinship classes were released on 19 July 2010 with the Dungeoneering 1.5 update, in the original update post, the berserker class effect was described as "Increases Strength levels when calculating damage."[2] Players who purchased this class quickly discovered that when they used spears, they did not get the damage boost. They began to suspect that in order to gain the damage boost, they had to be in the aggressive stance, which spears did not have. They cited the Dungeoneering 1.5 Developers' Blog, which had a work-in-progress screenshot of the class interface which described the berserker class effect as "Increases max hit when in aggressive stance."[3] Initially, Mod Mark H stated that the berserker class did not require the aggressive stance to use,[4] however soon afterwards Mod Emilee and Mod Trick confirmed players' suspicions that they must be in the aggressive stance.[1][5] Many players were very upset by this, since many meleers use spears exclusively while in the dungeon, due to the fact that they have the ability to fight with stab, slash or crush without having to change weapons. They felt that they had wasted a vast amount of tokens on a ring that was of no use to them, and that they were not at fault due to the discrepancy between the Update post, the Game Guide, and the actual mechanics of the game. In response to this, Jagex began looking into ways to reimburse players,[5] and stated that they were working on a one-time only reset option, which was offered on 19 August, 2010.

Free players may find the ring of kinship useful for a variety of tasks, as it teleports players very close to a bank. This can be used to make Fishing, Woodcutting, or Mining less time consuming. This is the third-fastest teleport to a bank in free-to-play, roughly tied with Archaeology journal. War's Retreat Teleport is the fastest, but requires Combat level 60 and 10 boss kills to unlock. Clan vexillum is second fastest, but it requires being in a clan and is equipped in the weapon slot.

Members can combine this ring with a spirit graahk familiar for Runecrafting but using a Tokkul-Zo or ring of duelling are still faster options. It has no combat bonuses and can be taken onto Entrana. Law rune running can be convenient as banking time is shortened.