From the RuneScape Wiki, the wiki for all things RuneScape
Jump to navigation Jump to search
Item JSON: {"edible":"no","disassembly":"no","stackable":"no","stacksinbank":"no","death":"always","name":"Wicked hood","bankable":"yes","gemw":false,"equipable":"yes","members":"yes","id":"22332","release_date":"17 October 2011","release_update_post":"Deathcon II: Halloween 2011","lendable":"no","destroy":"You will not lose any progress you made with your wicked hood, and you can get another one by speaking to Tam McGrubor in Burthorpe. If it was re-coloured before being destroyed, the colour will be reverted to the standard pink.","highalch":false,"weight":0,"lowalch":false,"tradeable":"no","examine":"A menacing, magical hood which conjures runes and rune essence.","noteable":"no"}

The wicked hood is a members-only item that can be obtained from Tam McGrubor in Burthorpe for free, or from Wizard Finix in the Wizards' Tower, for 175 Runespan points.

The wicked hood functions the same way as a talisman, granting access to the Runecrafting altars. Before it can serve this function for any given altar, the player must "feed" the talisman or tiara corresponding to that altar to the hood. One hood can serve as a tiara for all altars, once one of each talisman (or tiara) has been fed to the hood. There are exceptions to this: Air and Mind are unlocked automatically; the Astral Altar does not have a talisman, although it requires Lunar Diplomacy and an omni-talisman to be activated.

If a player "feeds" an omni-talisman to the hood, its daily rune essence allowance will be upgraded to pure essence.

If the player loses their wicked hood and does not keepsake it, the player can get a new one for free from Tam McGrubor, and all previously unlocked altars will still be unlocked.

Once a talisman is "consumed" by the hood, the hood may teleport to that altar, create that type of rune, and enter that altar. Players can upgrade with other talismans or their corresponding tiaras to expand its repertoire of rune types.

Using an Elemental talisman on the hood allows using the Rune option two times a day.

The hood has a range of Runecrafting functions:

It is also possible to upgrade the wicked hood by purchasing wicked equipment from Wizard Finix's Runespan shop. The bonus will be permanent after the player buys these items. Buying more than one piece of each type does not upgrade the hood further.

The extra essence/runes from buying a piece of equipment will be available instantly even if the player has claimed the essence or runes for the day, previous to buying the piece.

Withdrawing essence from the wicked hood when in inventory

Withdrawing essence from the wicked hood while equipped.

If a player is Runecrafting with the hood, it is advisable to withdraw the essence at the altar. This allows the player to craft runes from 100 to 175 essence without banking once a day.

If the player attempted to teleport to the Law altar with banned equipment (armour and weapons not allowed on Entrana), the message, "The power of Saradomin prevents you taking armour or weaponry to Entrana" will appear in the chatbox, the player will remain where they are, and they will not use up a daily teleport charge. Attempting to use the hood during Devious Minds while the pouch containing the orb is in the player's inventory will have the same result. The wicked hood itself is allowed onto Entrana.

Having both the wicked hood and demonic skull equipped will prevent players from entering the Law Altar; however, this does not occur if one or both items are in the inventory.

Having multiple wicked hoods will not allow a player to get more rune essence or teleports each day. When one wicked hood is fed talismans or tiaras, all other wicked hoods a player owns will also be upgraded.

The hood can be even more beneficial in the Great Orb Project (requires level 50 Runecrafting) at the Runecrafting Guild. A more practical choice would be the Ourania Runecrafting Altar (one can easily get over 2k experience a day using this method and only going to the Ourania altar, more than at any other altar - though not as profitable). These two places give double experience per Pure essence crafted. It may also be useful to bring this hood along while making combination runes and are using a binding necklace, even better in conjunction with the Lunar spell Magic Imbue (level 81 Magic).

With the introduction of Divination, the Nature Altar teleport on the Wicked Hood becomes the quickest way (other than hard-to-obtain Nature tabs) to access the level 50 (Gleaming energy) training spot. 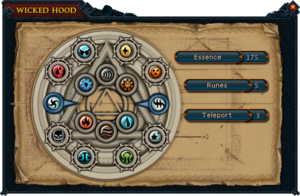 The interface, accessed by clicking the hood, shows you the remaining actions you have for the day. 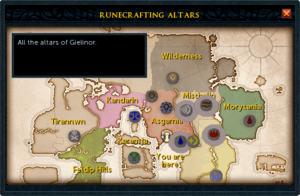 Should you lose your hood, you can reclaim it from Tam McGrubor at any time, retaining any talismans you have added to the hood, but you may only have one hood at a time. The hood does not drop on death.

The wicked hood can be recoloured through runecrafting in the Runespan.

Higher experience gains from the wicked hood can be obtained under the bonus experience effect from the Abyss, using a demonic skull to maximise experience if possible. After entering the Abyss its effect remains for 1 minute, during which the player may use the wicked hood to teleport to and runecraft at a runecrafting altar, or take extra essence.

The player may gain additional teleports for their wicked hood using wicked hood teleport tokens, which can be gained from Treasure Hunter or bought from Wizard Rinsit's Runecrafting Shop for 1,500 Runespan points each. Each token adds 3 teleports to the hood, up to a maximum of 250; after that, the hood cannot consume more tokens until stored charges are used. Adding 83 tokens at once stores 249 teleport charges. Each teleport with the hood uses up one charge.

The hood's 2 (or 3) daily free teleports are stored separately from the teleport charges from tokens. However, the interface only shows the total charges stored and not the individual types of charge, and there is no visible notification about using a stored or free charge. This means the overall maximum number of charges is 252 (or 253). The free daily teleports are always used before the stored charges.

This following table calculates the profits from withdrawing runes from the wicked hood. The inside ring (F2P) runes will withdraw 100 runes, while the outside ring (members') runes will withdraw 5. Runes can be withdrawn once per day, or twice if an elemental talisman has been added to the hood. You can remove runes an additional time for each of the 3 pieces of the Wicked robes that are owned. This results in a total of 5 times.

The following table shows the profit that can be obtained from each altar, using just the essence carried in the wicked hood. Additional runes carried in pouches, inventory and familiar can provide up to 282 more essence increasing profit by 161%, not counting the cost of summoning a familiar and repairing/replacing pouches. 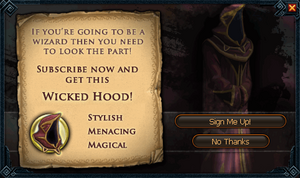 The pop-up when the player reaches level 5 runecrafting in free-to-play.
Retrieved from ‘https://runescape.wiki/w/Wicked_hood?oldid=35968055’
Categories:
Hidden categories: