From the RuneScape Wiki, the wiki for all things RuneScape
Jump to navigation Jump to search
The Old School RuneScape Wiki also has an article on: osrsw:Drakan's medallion
Item JSON: {"edible":"no","disassembly":"no","stackable":"no","stacksinbank":"no","death":"always","name":"Drakan's medallion","bankable":"yes","gemw":false,"equipable":"yes","members":"yes","id":"21576","release_date":"31 August 2011","restriction":"surface","release_update_post":"The Branches of Darkmeyer","lendable":"no","destroy":"You'll probably be able to find another one in the cave South of Burgh de Rott.","highalch":false,"weight":0.01,"lowalch":false,"tradeable":"no","examine":"An ancient medallion, belonging to Lord Drakan.","noteable":"no"} 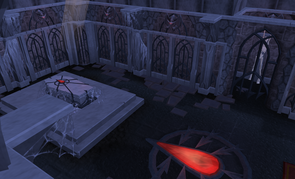 Down in the cave, the player may search this coffin for the medallion.

A player teleports using the medallion.

Drakan's medallion is an item rewarded from The Branches of Darkmeyer. It provides teleports around Morytania.

The medallion has 10 charges, and can be recharged by dipping it into the blood pool, in the cave where the medallion was originally found. The entrance to the cave is found just south of the bank in Burgh de Rott. Upon charging it, you receive the message, You dip the medallion in the pool. The symbol glows as it recharges. Congealed blood can be used on the medallion to add one teleport charge per congealed blood. This can increase the amount of charges stored to a maximum of 25,000.

Teleporting with the medallion from anywhere within the land of Morytania (which includes Canifis, Port Phasmatys, Mos Le'Harmless, Everlight and underground areas) does not use any charges and may even be done when the amulet has 0 charges. However, teleporting from Paterdomus, or from any other part of RuneScape uses one charge. Therefore, if one wants to save or negate the need for charges, it is a good idea to use the Ectophial to teleport to Port Phasmatys or to use the Canifis Lodestone and then use the medallion to teleport to the desired location. This effectively gives the medallion an unlimited amount of charges.

The medallion is extremely useful for teleporting around Morytania, since no charges are used when teleporting in most places there. It allows quick banking at Burgh de Rott and quick prayer recharging at the altar in Darkmeyer. This is particularly useful for players doing Barrows, as banking and prayer recharging are both needed to do multiple runs of that minigame. Be aware that the Vyres in Darkmeyer will attack a player going to the altar there unless the player is wearing the Darkmeyer disguise. However, Protect from/Deflect Melee will partially protect the player from the attacks.

During the quest, the medallion is first discovered in a coffin, and is called mysterious medallion. It is later enchanted by Safalaan and Vanescula Drakan to create Drakan's medallion. Should you ever lose the medallion, like destroying it, you can get it back from the coffin in the cave.

It includes teleports to the following locations: