From the RuneScape Wiki, the wiki for all things RuneScape
Jump to: navigation, search
For other variants of this item, see not hooded, untrimmed.
Hooded completionist cape (t)? (edit) 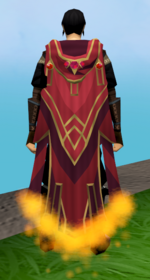 The customisation screen for the completionist cape

The colours of a completionist cape can be customised by using the option in the right-click menu of the cape. In the Skillcape Customiser interface, players have the right-click option on the either of the four colour palettes to get or set a certain colour via the HSL colour algorithm (hue, saturation, and luminosity).