From the RuneScape Wiki, the wiki for all things RuneScape
Jump to navigation Jump to search
The Old School RuneScape Wiki also has an article on: osrsw:Menaphos

Menaphos, also known as the Golden City, is a city located far south in the Kharidian Desert. It became an accessible in-game area on 5 June 2017. Accessing the city requires partial completion of The Jack of Spades quest, which is started in Al Kharid by speaking to Emir Ali Mirza in the Al Kharid palace. To access all of its available content, the quests Icthlarin's Little Helper, Dealing with Scabaras, Missing My Mummy, Do No Evil, and Spirits of the Elid have to be completed, and levels 88 Slayer, 73 Hunter, 72 Fishing, and 50 Agility, Construction, Crafting, Divination, Dungeoneering, Prayer, Runecrafting, and Thieving have to be achieved.

The city was released alongside four accompanying quests, The Jack of Spades, Crocodile Tears, Our Man in the North, and 'Phite Club. More lore is revealed throughout City Quests, where Menaphos citizens ask the player to assist them.

A reputation system gives rewards for each of the four sectors of the city. A faction can be selected by clicking the progress icons that appear while in Menaphos.

The Golden Gates of Menaphos 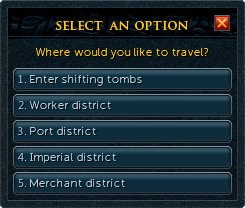 Quick travel interface prior to 3 July 2017

Travel between the four districts of Menaphos can be simplified by using a right-click interface on the entrance of the Shifting Tombs found in each district.

Prior to an update on 3 July 2017, a right click would give the option of "Quick travel Shifting tombs". Five options were available including entering the Shifting Tombs and quick travel to the entrance of each district's Shifting Tombs entrance.

Menaphos is a mid-level hub city like Prifddinas, with skilling methods offering higher rewards coming at a greater risk. The city is made up of four main areas, each being roughly the size of Port Sarim, arranged around a pyramid and plaza.

Skilling in the city introduces several new skilling resources, including:

Menaphos is plagued by Amascut, who is controlling the city's leader, The Pharaoh, and causing destruction while searching for her father, Tumeken. In the process, the Tombs of Menaphos have been revealed, and can be explored by playing Shifting Tombs, a minigame where the player can explore to try and complete objectives. A large amount of experience will be gained for completing the objectives, and far less will be awarded if the player does not.

The Menaphos journal lists some tasks that can be completed for the library.

Completing most content in Menaphos unlocks the Sandy [Name] title. For the requirements see Sandy.

The Merchant district is located in the north-east area of Menaphos, accessed through the main doors to the city. There are the city doors to the north, the Worker district to the west, and the main plaza and Lodestone to the south. Its Faction leader is Grand Vizier Ehsan (Merchant). It features:

The Imperial district is located in the western area of Menaphos, accessed by stairs on the western side of the main plaza. Its faction leader is Commander Akhomet (Imperial). It features:

The Port district is located in the southern area of Menaphos, accessed by stairs on the southern side of the main plaza. Its faction leader is 'Admiral' Wadud (Ports). It features:

The Worker district is located in the north-west area of Menaphos, accessed by stairs on the western side of the Merchant District. Its faction leader is Batal (Worker). It features:

The following quests may be started in Menaphos:

Part of Menaphos claimed by the sea.

The Second Age saw a rise in power of the Menaphites, a group of humans that had settled in the Kharidian Desert during the dawn of humanity. The Menaphites played large roles in the construction and management of numerous settlements within the desert, including Sophanem, Ullek and Uzer.

The God Wars that scarred Gielinor during the Third Age brought great battle to the Kharidian Desert. Uzer was destroyed by the Elder-Demon Thammaron and Ullek fell shortly afterwards to Balfrug Kreeyath. To worsen matters, exiled followers of the fallen god Zaros were forced into the desert, where they wreaked havoc amongst the local populace. The only surviving cities were Menaphos and Sophanem, which were, at the time, little more than small Menaphite camps. The refugees from the destroyed settlements fled to Menaphos and Sophanem, where they contributed to the cities' prosperity. By the Fourth Age, the twin cities were amongst the largest in the world.

Senliten was the first known ruler of Menaphos, and later on, her son Osmumten ruled. However, the Pharaoh's ancestors soon assassinated him, and began their illegitimate rule. By the Fifth Age, the Pharaoh was the ruler of Menaphos. He wished to undo the sins of his mother, the previous Pharaoh, but soon became corrupted by Amascut to do her bidding.

Menaphos held a large deal of political power within the Kharidian Desert, being the only city with any real strength; the only other settlements were small towns and camps such as Nardah and Pollnivneach. Menaphos went to war with Al Kharid for some time, but little is known of this.

After the end of the Menaphos - Al Kharid war, it was believed that Menaphos would open its gates to the rest of Gielinor. This, however, was not the case, due to the many plagues set upon Sophanem by Amascut. To prevent the spread of the plague, Menaphos closed its gates immediately. Many of the citizens of Sophanem were trapped inside, and any attempts by the Sophanites to negotiate with Menaphos were met with violence.

The city's closure was met with a great deal of resistance from the city's slaves, who rioted when they discovered that the slaves in Sophanem were no longer working because of the plagues. The riots were stamped out by the city's guards quickly.

Menaphos has made attempts to put one of their own leaders on the throne of Al Kharid under the guise of offering stability to the city while the Emir and Prince Ali are absent, including assassinating the Emir and kidnapping the prince. These attempts have failed, however. Amascut has revealed herself to be influential in these events, and it is unknown to what extent the pharaoh of Menaphos is aware of her involvement. Sometime later, the Pharaoh was overthrown and killed by Osman, Al Kharid's former spymaster and the true heir to the throne. Even though Osman stated that he would try to bring the city back to its rightful place, he has apparently done nothing, as stated by the menaphite beggars.

Due to the lack of combat and supposed fears of corruption, the Menaphite Guard have seen a large number of their soldiers desert. Several soldiers have turned into banditry, while a larger group led by a captain sailed to the Eastern Lands to escape the corruption beneath Menaphos and ended up working with the Acolytes of Seiryu due to their similar ideals.