Goulash is a reward from the Swept Away quest, released during the 2008 Hallowe'en event. Goulash may be obtained by using a bowl on the cauldron in the same location as the starting point of the quest. Goulash can be obtained in this manner up to ten times.

The experience works the same way as a lamp which players can obtain from a genie; players drinking it will be able to gain some experience on any skill. The experience is equivalent to the current level in a particular skill multiplied by ten.

A bowl of goulash cannot be placed in the bank, and a player can only have one bowl at a time. It must be consumed before the player can use a bowl on the cauldron again. The goulash does not have to be consumed immediately after the quest, though; a player can return to the cauldron at any time to get another bowl, until all ten have been received. 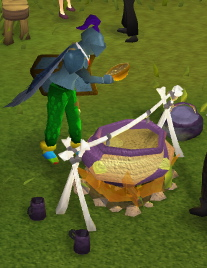 A player getting some goulash