From the RuneScape Wiki, the wiki for all things RuneScape
Jump to navigation Jump to search
The Old School RuneScape Wiki also has an article on: osrsw:Lunar Isle
For the music track, see The Lunar Isle.

Lunar Isle is an island shaped like a crescent moon, located in the westernmost point of Gielinor. It is accessible for member players who have gone far enough into the Lunar Diplomacy quest. Lunar Isle is led by the Oneiromancer. The inhabitants of the island are mostly women, with the only three men on the island working in the bank. A seal of passage is required to talk to any of the NPCs on the island, before or during Lunar Diplomacy (except for 'Bird's-Eye' Jack, who is one of the bankers); otherwise, the player will be sent back to Rellekka. It is not required after the quest. The Astral Altar is located on this island.

The isle has a bank, a magic shop, and a clothes shop. Suqah live outside the town walls. These have a part in Lunar Diplomacy but are otherwise used for training. The isle is home of the Moon Clan, beings with magic coursing through their blood, who are bitterly at war with the Fremennik.

Getting to Lunar Isle[edit | edit source]

Players have several ways to reach the isle.

Players can use the following means of teleportation to reach the isle:

A seal of passage is not required for this transportation method, however, you must have completed The Fremennik Trials to board the ship.

A seal of passage is not required for this transportation method. It is not needed for players teleporting to the isle. 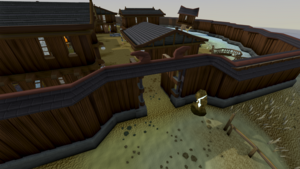 The gates of the town on Lunar Isle. The small obelisk is to the right of the gates. 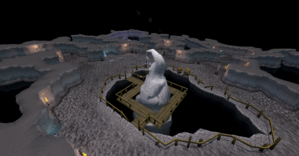 The essence mine in the northern cave