Our Man in the North

From the RuneScape Wiki, the wiki for all things RuneScape
Jump to navigation Jump to search
This article is about the quest. For the achievement, see Our Man in the North (achievement).

Our Man in the North is a Fifth Age[1] quest released along with the city of Menaphos.

To begin, speak to Grand Vizier Hassan, located in the Merchant District of Menaphos, who requires that you deliver a progress report to Emir Ali. He suggests that you grab the book that Osman previously requested from the Grand Library of Menaphos, to complete two tasks at once. Head over to the Grand Library, which is just west of the Imperial District shifting tombs teleport, and ask Kohnen the librarian about the book. He tells you that he cannot help you, but a man who used to work in the Grand Library, Aristarchus, may. Unfortunately, due to the lockdown of Menaphos, he cannot get back into the city. Head over to Commander Akhomet just outside the library in front of the grand pyramid and request that she have the guards allow Aristarchus back into Menaphos; tell her Aristarchus specialises in the history and royal bloodline. She agrees to let him back into the city, but only because she doesn't agree with the Pharaoh's decision to ban bloodline information. 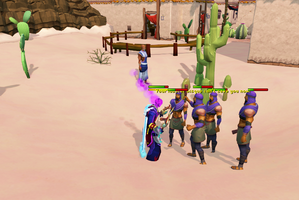 A group of thugs attack.

Grab combat equipment, and head over to Aristarchus, who resides just north-west of the southern Pollnivneach rug merchant. You can fly here directly from the Menaphos rug merchant. You can also use Portmaster Kags located in the Port district to travel to Pollnivneach. Upon informing him that he can return to Menaphos, a Menaphite thug appears, and reveals that he's been watching Aristarchus. He plans to disguise himself as Aristarchus after killing him to gain entry into Menaphos. When you move to defend him, the thug will call three of his friends to kill you both. They are level 122, and have 15,000 health each. They use melee and it is easy to line them up and fight them one by one. Fend them off, then speak with Aristarchus again. He agrees to meet you in the Grand Library.

Head over to the Grand Library. Talk with Aristarchus. He will give you the book you need, which is disguised as a children's book. He remarks that it's a shame there's no one from that time period that you can talk to corroborate what's written in the book. Thankfully, you know an ancient pharaoh queen! Head over to Senliten in the Uzer Mastaba once again, residing north-east of Nardah. You can use fairy ring code DLQ or the desert amulet 2 or higher to get there quickly.

When you enter the mastaba, a short cutscene will appear with dialogue between Jabari and the Pharaoh. Talk to Senliten, and it will be revealed that Osman and Leela are her descendants, not only making them royalty, but also making Osman the current true heir to the throne of Menaphos. Osman knows this, and plans to prove it, but Senliten and Leela explain that he's going about it the wrong way, and suggest that you try and talk him down. 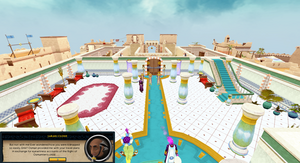 Jabari and his clones in the palace.

Head over to Al Kharid and talk to Osman. You will give him the book, and relay what Senliten has told you. Osman agrees to go see the two again and resolve things, then tells you to report to the Emir. Talk with the Emir (just behind Osman), and Jabari will burst into the throne room. He argues briefly with Osman, revealing to the Emir that Osman helped the Menaphites kidnap him by giving them his travel logs in exchange for information about his ancestry. Osman responds by revealing that he knows Jabari killed Emir Shah. The Emir declares that both men are to be arrested, but Jabari uses his magic to create clones and hide throughout the city. Now you have to hunt him down in Al Kharid; after each conversation with Jabari he will damage you for 10% of your max health.

To begin, go to Dommik's Crafting Store in the north-eastern part of the city and make your way up the stairs and then the ladder, onto the roof. 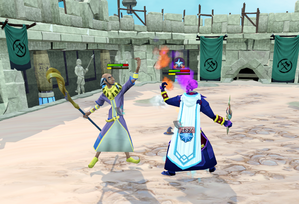 The battle with Jabari.

Grab your gear and supplies and head over to the bonfire to the west of Het's Oasis. There, Jabari will challenge you to a "fair duel with no tricks." Accept, and he will teleport you into the arena, where you're faced with 8 Jabari clones. Once you find the real Jabari, you must defeat him, using whatever combat style you wish. Although this is an easy battle, Jabari shouldn't be underestimated.

This is a game of Spot the Difference. In the first round the correct Jabari is always the one who is not translucent. After that the real one can be found randomly with the following differences:

If you are too slow to find the real one, he will attack you and the difference will be randomised again. This deals increasing damage until the fifth time, at which point the duel is lost and the player can restart from the beginning.

Players can simply click through all the clones until they find the real Jabari if the difference is too small to see. Saradomin brews should be taken for this method, since the clones deal 10% of your maximum health as damage. 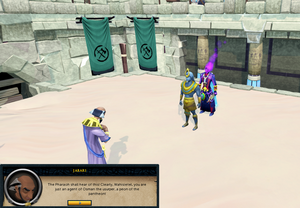 Het appears and protects you from Jabari's attack.

After Jabari is defeated four times, a cutscene starts, and Het appears to tell Jabari he has lost. Jabari refuses to go honourably and threatens to urge Amascut to retaliate against both you and Het. You inform him that the Pharaoh will likely want him imprisoned too, as his actions have threatened the trade deal. He responds by teleporting away.

Talk to Het at the Duel Arena entrance. He will inform you that he, Crondis, and Apmeken plan to search for Scabaras, despite his return being the last piece Amascut needs for her plan. Het asks that you will stand with the pantheon against Amascut when the time comes. 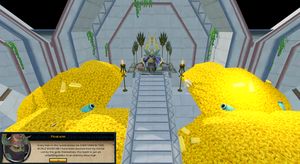 The Pharaoh reveals his goals.

Head back to Emir Ali, and talk to him. This triggers a cutscene in which Osman is declared a traitor, and is exiled from Al Kharid. Osman swears that he will become Pharaoh to cement peace between the two cities, regardless of the Emir's feelings toward him, and teleports away. Another cutscene will begin with the Pharaoh calling for Jabari, who does not appear. He will then go on about his goals to ascend to godhood. He then continues calling for Jabari to no avail.

Speak to the Emir again after both cutscenes to finish the quest. 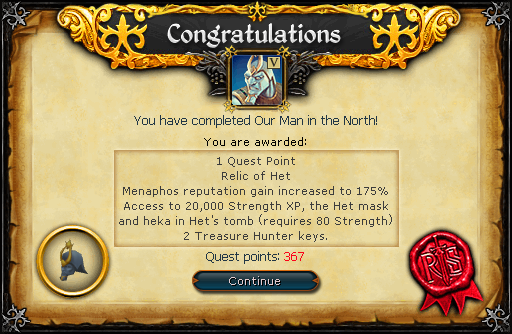 Our Man in the North is directly required for the following quests/miniquests: