From the RuneScape Wiki, the wiki for all things RuneScape
Jump to: navigation, search
Jennica's ring? (edit)

Jennica's ring is one of the rewards given after completing the Wilderness quest Spirit of Summer. It belonged to Jennica Bonde. This ring provides no stat bonuses. It is used to access portals to the parallel Spirit Realm. It is used in the sequel quest, Summer's End.

The ring will not teleport if the player has been teleblocked or is currently in combat. To use the ring, the player must stand directly on top of or adjacent to the portal with the ring equipped and operate it.

Speaking to the Strange Old Man at the entrance to the Barrows while wearing the ring allows for a few lines of dialogue regarding the ring. 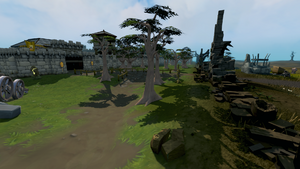