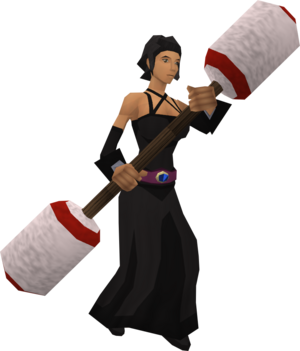 A player wielding a Pugel stick.

A pugel is the weapon players use on the balance beam, a form of the combat ring in player-owned houses.

A Pugel stick can be obtained by building an extra weapons rack.

This information has been compiled as part of the update history project. Some updates may not be included - see here for how to help out!
Retrieved from ‘https://runescape.wiki/w/Pugel?oldid=35272741’
Categories:
Hidden categories: