Al Kharid (pronounced "Al car-REED"[2]) is a city on the northern border of the Kharidian Desert. It is the only desert city available to non-members. It is one of the desert's two major hubs, with the other being Menaphos.

Al Kharid is ruled by the Emir, although the vast majority of the work has been taken over by Chancellor Hassan since the Emir's son was kidnapped. The city is independent from both Misthalin, or any government in the Kharidian desert. Al Kharid was built in the early Fifth Age, by settlers from outside the desert. The dominant religion of Al Kharid is the Menaphite Pantheon with most citizens worshipping Het.

In the early Fifth Age, Al Kharid was one party in a bloody war with Menaphos, the one half of the capital city of the Desert. Some 50 or 60 years ago, the Emir and the Pharaoh of the Menaphites established a peace pact to protect the prosperity and wealth of both cities. The Pharaoh planned to reopen Menaphos to public, but this was prevented by the Goddess of Destruction, Amascut, who unleashed a hazardous plague on the neighbouring city Sophanem, leaving the pharaoh no choice but to close the city and put Sophanem in quarantine, leaving many Sophanites trapped in Menaphos. Menaphos became heavily guarded, under the command of Coenus, even so when Sophanem was freed after Contact!. Al Kharid had much involvement in these developments, since Kharidian agents were trapped in Menaphos. Maisa, sent by spymaster Osman, and an adventurer tried to find a way through a very dangerous tunnel system under the cities to escape Menaphos, but a huge chasm and a giant scarab prevented this, the latter being the reason for the death of agent Kaleef. After the quarantine was lifted, Maisa had already escaped the city by pretending to have died of the plague, after which her body was dumped into Sophanem to be embalmed. 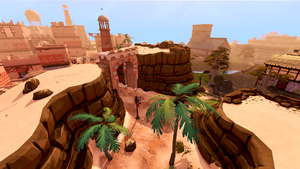 The path to the city 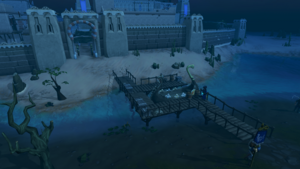 The boat that takes players to Daemonheim. 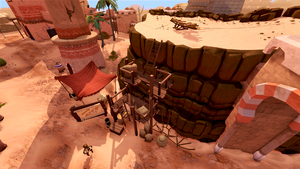 Players can find a number of non-player characters in Al Kharid:

Al Kharid contains the closest bank to a range and the second closest to a furnace in non-members RuneScape (the closest furnace being in Burthorpe), as well as two reasonably close net and bait Fishing spots. Al Kharid also plays home to a tanner named Ellis. 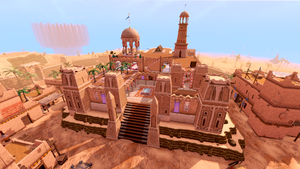 The Al Kharid palace is the residence of The Emir and the seat of government for the emirate of Al Kharid. Hassan, the Emir's chancellor, is present in the palace's throne room and features in the Stolen Hearts quest. Osman, the emirate's spy master, is found just outside the palace along the eastern section of the northern hedge. He features in the Stolen Hearts, Diamond in the Rough, and Contact! quests and will also give Thieving experience in exchange for sq'irkjuice obtained in the Sorceress's Garden minigame.

Many Al Kharid warriors are inside the palace and can be trained on and pickpocketed. 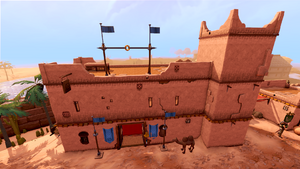 Al Kharid's bank is to the south-west of the city (see banks). The bank is populated largely by craftsmen, smiths and chefs due to the proximity of the tanner, range and furnace to the bank. In the free worlds, the bank used to be often crowded with players buying and selling cowhides, but it also could get crowded in members worlds too. The introduction of the Grand Exchange has eliminated the selling and buying of cowhides almost completely.

Zeke's Superior Scimitars is located to the north of the Al Kharid palace.

Players are also able to ask about the Dragon scimitar, however Zeke will reply by making several puns relating to the Monkey Madness quest, which is required for players to be able to wield a dragon scimitar.

Dommik's Crafting Store is located to the north-east of the Al Kharid palace.

is located to the east of the palace.

is located to the east of the Al Kharid palace.

is located to the east of the Al Kharid palace.

The Kebab shop is located directly north of the bank, in the house with a range. Players may purchase a kebab from Karim, the kebab salesman, for 1 coin each.

is located to the north of the Al Kharid township and to the south-east of the Lumbridge gate.

The trader sells the following items (prices may change and are only valid when there is one gem in stock):

located to the north of the Al Kharid palace, provides a quick and simple method for newer members to gain money quickly. If the player is prepared to click through a lengthy dialogue, they can buy silk cheaply (3 coins) which may then be sold for a profit at any general store excluding the general store in Al Kharid. (Note: It is possible for players to lower the purchase price of the silk by refusing the original offer by the silk trader and instead settling for a price of 2 coins).

. He sells various items, and once The Feud is completed, he will open various other shops if you set up merchanting opportunities for him.

Talk to him (there is no Trade option) and select the "Ya, I'll get to it soon." option. When he asks "...Unless you want to make a small purchase from me first?", select Ok.

sells tools which are useful for playing games with a clan. He is located in northern Al Kharid.

The Sorceress's Garden is a safe minigame found in the south-east of Al Kharid. Talk to the apprentice to enter. 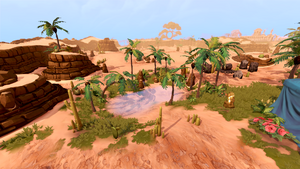 The Al Kharid mine includes 6 silver rocks, 4 gold rocks, 3 common gem rocks, and 4 uncommon gem rocks. It no longer serves as a source of copper, tin, iron, coal, mithril, or adamant. Beware of scorpions (combat level 14), they can do considerable damage to players with a low combat level.

The Duel Arena is found north-east of Al Kharid. It can be more quickly accessed with a Ring of duelling.