From the RuneScape Wiki, the wiki for all things RuneScape
Jump to: navigation, search
Captain's Log? (edit)

The default function of the Captain's Log is to read the player's port statistics. The log contains five pages with the following information:

This page contains the status of each of the player's ships. Underneath the name of each ship, there is a label that says either sailing, returned, or damaged. As of the 25 March 2013 update, the log also shows the estimated time of arrival (ETA) of any sailing or damaged ships. As of 26 January 2015 the log also allows sending out voyages and checking results from outside of the port.

This page shows chat heads and statistics regarding:

This page shows all of the statistics regarding the player's progress in their player-owned port.

A map of the Wushanko Isles

By selecting the right-click "Map Captain's log" option, players can view a map of the lands they have discovered so far. When in map mode, descriptions of the area and island will appear when hovered by the mouse cursor. If the player is currently exploring one of the first seven areas (The Arc–The Loop), then the map will also show a "Next Zone" progress bar that shows the progress made toward unlocking the next area. This bar includes a numerical value (0%–99%) and fills up with a red rectangle reflecting the progress made. If the player has reached the final area, The Shield, then there will not be any progress bar on the map.

Players can use the Captain's Log to teleport inside their player-owned port. This is an unlimited teleport and can be used as often as desired. Right click the item and choose "Teleport Captain's Log" to activate the spell. This function was added to this item in an update on 14 January 2013. The destination of the Captain's Log teleport was altered in an update on 18 August 2014. Prior to this update the teleport's destination was the area outside of the player-owned port at the portal in Port Sarim.

In addition to providing instant access to the portal, the teleport function can also be useful for quick access to a player-grown spirit tree and therefore the spirit tree network. 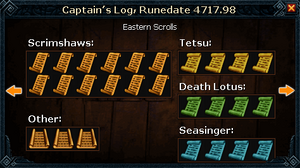 The Eastern Scrolls page before it was removed
Retrieved from ‘https://runescape.wiki/w/Captain%27s_Log?oldid=34189982’
Categories:
Hidden categories: