From the RuneScape Wiki, the wiki for all things RuneScape
Jump to navigation Jump to search
This article is about the event. For the emote, see Super September (emote).

Super September was an event that took place in September 2013, spanning from 1 September until 30 September. During the event, members were able to complete daily Super Challenges. These challenges took many forms, but each day there was a unique challenge. None of the challenges had skill or quest requirements, although some challenges could be completed more easily with specific quests. Progress through the day's challenge was shown the in the chatbox in cyan text, and completion was displayed in teal text, and the messages appeared when the game messages were filtered, unlike normal daily challenges. These challenges had to be completed on the given day and expired the next day.

All experience gained from daily challenges was also boosted during the event, with all challenges rewarding 2x the experience they normally would, although Dungeoneering challenges only rewarded 1.25x their regular experience. 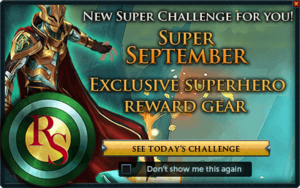 Ingame popup for the event.

During two different weeks during the period of September, one starting at 6 September and one at 20 September, a hiscore event took place. These events last for a week and can be repeated as many times a player wants. When a player ends in the top 1000 of either of the events, additional rewards may be obtained. While there were a total of 2000 spots available for the additional rewards, only 1962 unique players earned them. This is due to 38 players who had placed in the top 1000 of both events.

Every challenge completed awarded experience when handing the challenge in at the Imperial Guard Quartermaster in Burthorpe, as well as milestone rewards after a certain number of challenges were completed.

Experience was awarded for handing in challenges to the Quartermaster as follows:

Milestone rewards were awarded after completing a certain number of challenges, starting at 5. These challenges didn't have to be completed in a row. Some of the rewards awarded loyalty points on top of the other items. It was not required to hand the challenge in at the Quartermaster for it to count towards the Milestone rewards. All the rewards, which are redeemable at the Customisation interface, are found here:

Additionally, if you finished in the top 1000 of one or both of the two hiscores events, you would have obtained the following two titles (and the Superior hero outfit, if you hadn't yet). 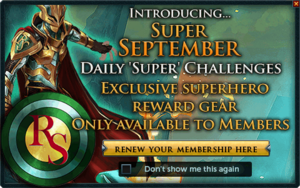 Popup in a F2P account
Retrieved from ‘https://runescape.wiki/w/Super_September?oldid=35620292’
Categories: