Bravek is the city warder of West Ardougne with the highest authority in the city during King Tyras' absence. His office is on the 1st floor[UK]2nd floor[US] of the Civic Office.

Bravek is a slightly chubby middle-aged man with long, brown spiked hair and a Fremennik-style split beard. He is a heavy drinker and often suffers from hangovers that inhibit his ability to think or function in office. He has resorted to others, such as Rick or an adventurer, for a hangover cure after his herbalist Trudi caught the "plague" and was taken away by the Mourners.

Dealing with the plague[edit | edit source]

After the king's departure, Bravek was put in charge of overseeing the administration of West Ardougne. Once Tyras' brother King Lathas allowed the Prifddinas Death Guard to put West Ardougne under quarantine, the entire city of Ardougne was led to believe that the west had been stricken by a plague. As such, the Death Guard members, disguised as plague healers and nicknamed "mourners". Unbeknownst to the city warder, they would secretly poison the city population and kidnap those with alleged plague systems to dig beneath the Galarpos Mountains as slaves. Amongst these victims was Trudi, Bravek's herbalist.

Bravek is able to override the head mourner's authority should the mourners be doing badly. The mourners' believed competence in handling the plague and his own drinking habits, however, usually deter him from taking any action. This leaves the mourners in charge of most day-to-day administration, even though Bravek is officially the city warder.

In 169, Elena, a young researcher from East Ardougne who had been helping citizens in West Ardougne, came close to discovering the truth about the plague, to which the mourners abducted her and locked her in a cell within a guarded, supposedly plague-stricken house. Her father Edmond enlisted an adventurer's help in finding her and they soon found out from the Rehnison family where Elena had been taken to. The mourners did not allow them inside however, on the grounds that permission from either the head mourner or the city warder was needed. 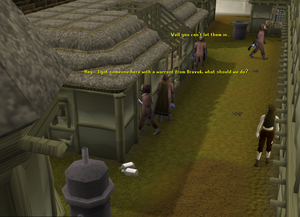 The adventurer convinced Bravek's clerk to allow them to meet him, but the city warder was in no state to discuss anything due to a severe hangover. He managed to scrawl up a recipe for a cure, however, which the adventurer made for him. They then convinced him of the gravity of the situation, and Bravek agreed to provide them with a warrant to enter the house, saying that the mourners may not take the kidnapping seriously enough and recognising Elena's efforts in helping the citizens.

While the mourners on guard were discussing what to do now that they had been given a warrant from Bravek, the adventurer sneaked into the house and freed Elena from her cell, earning her and her family's thanks.

Despite his frequent drunkenness, it seems that Bravek understands the situation in West Ardougne fairly well and has not exposed the plague hoax due to the knowledge that his disappearance can be facilitated by the Mourners under the guise of catching the plague. As he is unable to help the player using his official role as city warder, and knowledge that the people might see him as much as a collaborator with the Mourners, he tasks the player with a list of several prominent citizens within West Ardougne to start an uprising.

After the revolution, he retains his position as City Warder and relieved from the threat of the plague hoax, promises to stay sober thereon in order to administrate the city better.

Transcripts Bravek is the author or co-author of:

This information has been compiled as part of the update history project. Some updates may not be included - see here for how to help out!
Retrieved from ‘https://runescape.wiki/w/Bravek?oldid=35582772’
Categories:
Hidden categories: