From the RuneScape Wiki, the wiki for all things RuneScape
Jump to: navigation, search
The Old School RuneScape Wiki also has an article on: osrsw:2014 April Fools

The 2014 April Fools' Day event featured the Sailing skill and various other small jokes. The Sailing skill could be found hidden at the bottom of the list of skills found in the Hero tab. It was not visually displayed under the "skills" tab, nor could one earn experience in the skill in any way. The highest level for the "skill" was 120, which only granted normal skill mastery instead of true skill mastery. The destinations tab of the skill also listed the anticipated Fossil Island as a place to sail to at level 120 sailing.

Also featured was the default animation for tending a bonfire to be changed from throwing logs in the fire, to the player throwing a random coloured party hat.

There were also a few changes made on the RuneScape Forums which include: 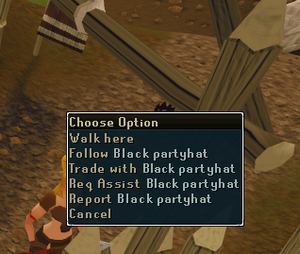 A Jmod turned into a black partyhat.

Attempting to telegrab the Jmod resulted in a message saying "You feel like something has gone terribly, terribly wrong", and you would turn into either a "sepia partyhat", "off-white partyhat", "teal partyhat", "orange partyhat" or "garish-pink partyhat" for a few seconds, having the same right click options as the JMod turned into a partyhat.