The Grand Party is an event turning the Lumbridge Crater into a celebration of RuneScape's history while providing certain skilling features and weekly events.

It was released with the game update on the same day as some other 20th Anniversary celebrations, on 4 January 2021.

The party is located in Lumbridge Crater which can be easily accessed by traditional means. Additionally, the holiday portal in the Tower of Voices can be entered, or the 20th anniversary invitation can be used to teleport the player to the area.

During the event, 10% more experience was gained when training skills in the crater. Despite the fact that Ironman see the experience bonus at their buffs, they don't actually get the bonus.

In addition to the usual bank chest found in the area, there are two anvils and forges in the south-eastern corner of the crater.

Each week of the event a different aspect of the game is featured (when a new week starts the events of the last one will be disabled).

Items required: a bucket, a ghostspeak amulet (or any method of communicating with ghosts), 3 eggs, 2 cabbages, and 1 tomato.

The first week of the event is the Celebration of Quests, featuring the following three miniquests to complete. To start the miniquests, talk to the Cook at the south-west area of the crater. He will ask you for help in baking a cake, and gives you a 20th Anniversary cake ingredients list to track the progress of obtaining the ingredients required. The ingredients are extra, extra fine flour, top quality milk, and a colossal egg.

Members receive a large prismatic lamp for each ingredient obtained. Note that ironmen do not receive lamps.

After all three miniquests are completed, return to the cook with the items, and he will give you 20th Anniversary cake, which provides a 3% experience for 5 minutes every 10 minutes. Members also receive a huge prismatic lamp.

You must have completed the quest Cook's Assistant before you can start this miniquest. Completion of The Restless Ghost is also recommended for the Ghostspeak amulet.

During this week, May appeared in the crater with her caravan, acknowledging the players in the area based on their status.

At the beginning of 11 January 2021, the following effects were activated, and lasted until the end of 18 January 2021:

Furthermore, on the game update on 11 January, two Elder Overload Golems were added, that could be attacked to get a 60 minute elder overload potion buff. The buff could be obtained without the 106 Herblore level requirement. Ariane and Sir Owen could be found next to the golems.

On the game update the Anniversary Weeks Portal was also changed to teleport players to War's Retreat.

The golems, NPCs, and portal teleport destination remained until the game update on 18 January 2021.

At the game update on 18 January 2021 the following boosts came into effect.

Brassica Prime could be found next to the portal during this week.

At the game update on 25 January 2021 the following changes came into effect. 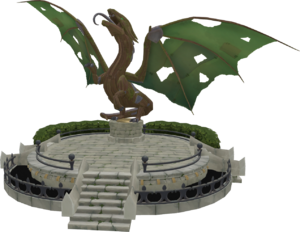 Elvarg effigy in the center of the crater.

The statues from the 15 Year Anniversary Celebrations could be found in the area with the more recent additions of the 2016 Telos statue, 2017 Menaphos statue, 2018 Solak statue, 2019 Anachronia statue, and 2020 Archaeology statue. The central platform features an effigy of Elvarg decorated with banners of Gielinor's cities and towns.[1]

The Anniversary Weeks Portal was located in the north-western corner of the crater.

Other pieces of decorations and scenery such as tents, tables, and chairs could also be found in the area.