From the RuneScape Wiki, the wiki for all things RuneScape
Jump to: navigation, search
Wilderness wall? (edit) 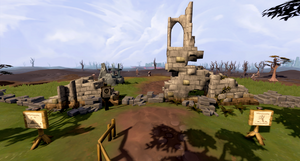 The Wilderness wall or Defensive Ditch (formerly Wilderness Ditch) is a long, low wall that separates the southern border of the Wilderness from the northern borders of Misthalin and Asgarnia. The player must jump over the wall to get into or out of the Wilderness. Previously, there was a Wilderness ditch instead of a wall. However, with the 15 September 2010 Z-buffering update, the ditch was removed because Jagex thought the ditch didn't look as good as it did before Z-buffering was added. The original ditch was added on 18 April 2007. It was created to warn players about entering the Wilderness and to help prevent luring. There have been many rants about this update, many from player killers. There was also a well-known glitch with the ditch.

It was possible to have your character to appear to "glide" across the ditch. If you performed the Home Teleport spell to the point where you have drawn the line, and then clicked to cross the ditch, you would not jump, but glide across the ditch. This has been confirmed to be un-fixable by Jagex. Oddly enough, you don't seem to enter the Wilderness area directly when jumped over the wall, it is one step forward from it.

Note that if you turn the warning to enter the Wilderness off, you may turn it back on by talking to the Doomsayer in Lumbridge, or through the in-game Gameplay Settings.

The wilderness wall can also be used to train Magic and Ranged because enemies on the other side are unable to attack you.