From the RuneScape Wiki, the wiki for all things RuneScape
Jump to navigation Jump to search
The Old School RuneScape Wiki also has an article on: osrsw:2013 Christmas event

The 2006 Christmas event lasted from 18 December 2006 to 4 January 2007. A festive Wintumber tree (for members only) and a reindeer hat were rewarded for doing the event.

The only time it has snowed on the Musa Point volcano.

The gublinch are creatures who live in caverns in the walls of Karamja Volcano. They have little regard for anyone other than themselves. They are affected by the cold, though, and nothing irritates them more than being just the tiniest bit chilly.

Since it started to snow at Karamja Volcano, the gublinch have become irritable and have started 'childernapping'. This is an old and horrible trick that the gublinch use whenever it gets too cold for them, and involves stealing the children from nearby Musa Point and forcing them to stoke the furnaces that keep the cave warm.

To start saving the children (Jack, Jeff, and Jill) from the gublinch, players had to find Shanty Claws, a mysterious werewolf who could be found singing songs on the northern dock of Musa Point.

Shanty Claws then explained how to defeat the Gublinch and told players what he had to offer you from his sizeable store of plunder, in exchange for filling his cages with the shards of frozen gublinch. 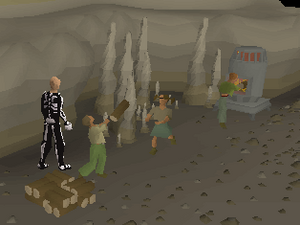 The gublinch lair could be found on the southern slope of Karamja Volcano, where there were piles of snow. Players then made several snowballs and headed down the well into the caves that the gublinch call their home.

The next step was to pelt as many Gublinch as players could find with the snowballs until they crumble into piles of gublinch shards. Once they had fallen to pieces like this, players could collect them and deliver them to Shanty Claws' cages on the dock.

Once the cages were filled up with Gublinch, Jack, Jeff, and Jill could escape, and could then be found at the dock where Shanty Claws was. Players could then simply speak to Shanty to receive their Christmas rewards!

The reindeer hat was one of two rewards for completing the 2006 Christmas event. The hat has no bonuses and is untradeable. If lost or destroyed the player can obtain another from Diango in Draynor Village.

A new emote is performed by using the "Emote" option on the hat while it is worn. "You act like a reindeer." 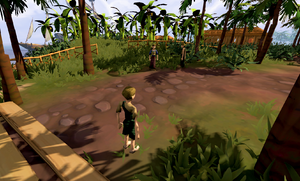 Jack, Jeff, and Jill, the three children visible to those who completed the Christmas 2006 event