From the RuneScape Wiki, the wiki for all things RuneScape
Jump to navigation Jump to search
The Old School RuneScape Wiki also has an article on: osrsw:2015 Easter event

The 2015 Easter event, officially named Easter Eggs-periments, featured the Easter Bunny, who once again needed help. This time, imps have overrun the factory, setting the jadinkos inside free. It was a puzzle-based quest, with players helping the imps to find their perfect jadinko pets through various means of gathering jadinko eggs, to use with an egg machine. 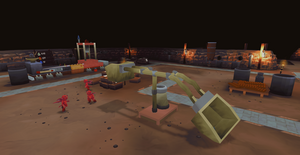 The Easter Bunny's overrun by imps.

To start the event, speak to the Easter Bunny, found to the north-west of the Port Sarim lodestone. Enter the rabbit hole, and talk to Easter Bunny again. He will mention that you should talk to the imp leader, Ringleader Vyvyan, nearby, and figure out what he wants. The imp leader tells you that he really wants a pet jadinko, and he'll leave the Easter Bunny's burrow if you get him a jadinko egg.

To start collecting eggs, head to any of the two rooms to the west of the factory, which are indicated by arrows on the minimap, and either fight, hunt or steal to get at least one egg. Fighting and thieving is done in the southern nest caves, while hunting is done in the northern hunting caves. All of these activities award a decent helping of experience. 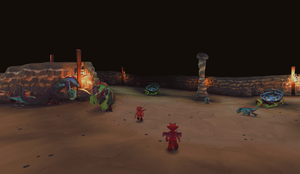 Jadinko nests of eggs can be found in the southwestern cave, and may be thieved from to obtain a wide variety of eggs. The higher the player's Thieving level you have, the easier it is to steal from one of the nests. Pure blue jadinko eggs are exclusive to this activity.

A variety of Easter jadinkos and imps may be found and fought in the northern cave for a variety of drops, which include jadinko eggs. The higher-levelled jadinkos are more likely to drop eggs than their lower-levelled counterparts, with the highest levelled being guaranteed to drop at least one egg. All the jadinkos can also rarely drop magical eggs, which provide a small boost in all combat stats when eaten. Pure red jadinko eggs can only be obtained from this activity. 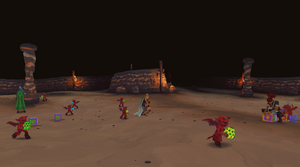 In the southern cave, a large number of egg-carrying imps may be found wandering around. To start hunting them, collect up to five modified magic boxes from the box near the entrance. As with normal box trapping, the number of traps you can have active at one time varies with your Hunter level, varying between one and five. Lay as many box traps as you can within the cave, and loot them for eggs when an imp is caught in one. Pure green jadinko eggs can only be obtained through this method. 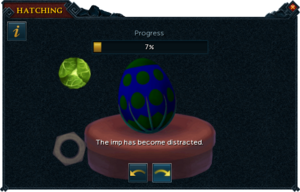 Once you have at least one egg, return to the ringleader. Now you will play a small minigame to hatch the egg. You need to keep the egg balanced by nudging it with the arrows, and click on the items flowing in to remove them. The text will provide hints on how well you are doing. You will gain a small portion of summoning experience for hatching the egg.

Once the egg is hatched, the ringleader will complain that the pet is not good enough, You will now need to go and talk to the dwarven engineer (located south east in the area) to learn how to create better eggs. 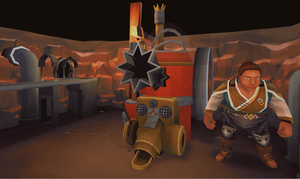 For the grade 2 fish oil, head to Gerrant's Fishy Business in Port Sarim (found just east of the entrance to the factory) and request it from Gerrant. When Gerrant asks you grade 2 fish oil is very specific, why do you need it? Reply with "5. I need it to save Easter!", and Gerrant will mention a number of unreasonable trades (143 strips of wool cloth, 3 off-hand dragon javelins, a royal crossbow, 22 rune bars, and a king black dragon hide) for the grade 2 fish oil, but will agree to give it to you on credit, knowing that you will pay up with your well known reputation. 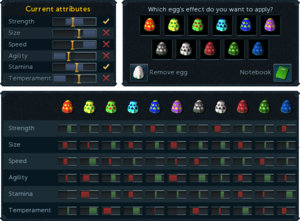 The interface that pops up when using the egg combining machine

The first egg you use will be consumed/transformed. Do not use pure eggs first since they are extremely rare.

When ready, return to the machine and use the eggs on it. Once enough eggs are used, the machine needs to be calibrated. The engineer will request for specific types of attributes from the resulting egg, and you need to use eggs to try and get these results. To find out what every egg does, click on the notepad icon on the bottom right, and you will then be able to see their attributes. You can apply as many eggs as you like to get the final requested result. Once done, repeat this again, but slightly harder, with a new requirement of keeping an attribute in the middle.

Once the combining machine is fully calibrated, return to the ringleader, who will then perform a new, more complex request. You don't have to remember this, it will be automatically shown in the machine interface. You may need to gather more eggs to complete this request. 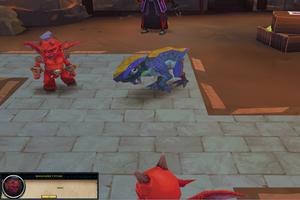 Once you have completed the request, take the egg and give it to the ringleader and it will hatch into Julian, which he will proceed to show off to his fellow imps. He will then tell the imps to leave the factory, although Vyvyan himself will remain.

Go and talk to the Easter Bunny, and he will thank and reward you for saving Easter. Congratulations, event complete!

After the event, the player can perform two more egg requests for Vyvyan – simply visit the machine. Each completed request earns you a medium easter reward lamp. The request can be changed without penalty by talking to the ringleader if it is too difficult. Leftover eggs can be sold to the ringleader for 20 coins each, or hatched for a small portion of Summoning experience.

Once you're done doing two special types of eggs, Vyvyan will teleport himself back to the entrance point; you can meet him there and continue hatching jadinko eggs for Summoning experience.

During the event, a competition was held for egg collecting inside the event area. Eggs from thieving the nests, hunting the imps, and killing jadinkos all counted towards the competition. The top 102 players received the title [Name] the Egg-cellent.