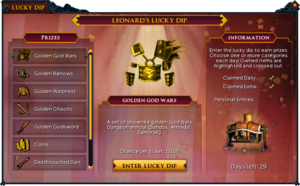 Leonard's Lucky Dip is a members-only event for the month of September in which players can turn in Lucky Dip tickets to Leonard at the Burthorpe lodestone for a chance to win a prize every day.

Players can earn two guaranteed tickets a day: one for speaking to Leonard, and another by finding Gilly Willikers or completing a daily challenge. You can also earn tickets by playing the game as normal; by participating in combat or training skills. Ten tickets are also given to all players automatically upon the start of the event.

Each ticket handed in increases the chances of winning a prize. It is the spiritual successor of Balthazar's Big Raffle.

Any existing raffle tickets from Balthazar's Big Raffle were replaced by the ones from this event.[1]

Ironman Mode players are disallowed from participating. However, they can still receive Lucky Dip tickets.

Any missed guaranteed tickets may be claimed later by redeeming a bond for a Lucky Dip ticket reclamation service which continues to claim any missed tickets throughout the event.

The event started on 1 September and lasts until the end of 30 September 2021.

Players who do not win a prize from their ticket(s) will receive a medium XP lamp for each ticket spent.

1/150 chance to win a random unowned God Wars set. Each set consists of a piece of head, torso, legs, hands and feet armour. Golden versions of the shields do not exist.

1/100 chance to win a random unowned golden Barrows set. Each set consists of a piece of head, torso and legs armour and a two-handed weapon except for Linza's which has a main-handed weapon and a shield. Golden versions of the dual-wield weapons do not exist.

1/100 chance to win a random unowned golden warpriest set. Each set consists of a piece of head, torso, legs, hands and feet armour.

1/100 chance to win a random unowned golden weapon (and corresponding off-hand where applicable).

1/100 chance to win a random unowned Golden Godsword. Each Godsword can be switched to and from its passive version at the corresponding God Wars Dungeon altar.

1/25 chance to win a one of five types of items (in varying quantities).

There are also 5 limited edition titles that will be awarded at the end of the event to 5 random players who take place in the raffle. Players get a higher chance of winning a title for each ticket entered. The titles are: