From the RuneScape Wiki, the wiki for all things RuneScape
Jump to navigation Jump to search
The Old School RuneScape Wiki also has an article on: osrsw:2013 Easter event

The 2007 Easter event started on 2 April and ended on 18 April. Players were rewarded a chicken set as a reward for completing the event.

In this event, the Easter Bunny asked Diango to get chocolate rabbits. 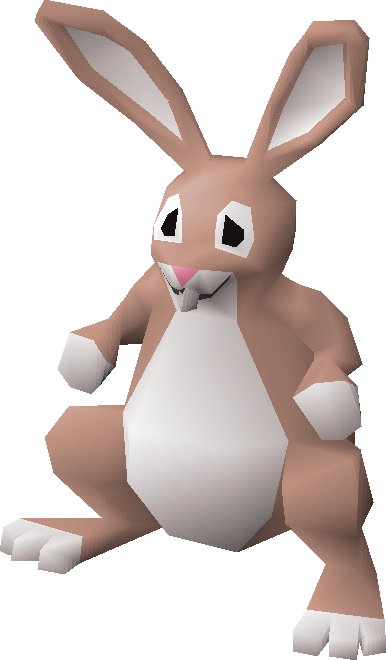 Needless to say, the chocolate rabbits did not come out as hoped. A miscommunication has led to chocolate kebbits, and not rabbits. It has always been in the kebbits' nature to scamper about and roam the countryside - as any hunter will testify - so they swiftly escaped. It is now up to you to return them  to the Easter Rabbit in time for delivery!

The holiday event can be started by talking to the Easter Rabbit, south of Falador and north of Rimmington.

When you have 10 of them, make your way to the kebbit chute and rabbit-imprinted door, north of the entrance to the caves. 'Use' the 10 kebbits on the chute, go through the door and ready yourself for a new task... 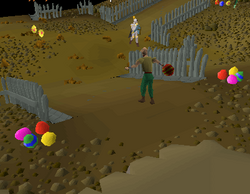 Inside, players saw four ramps and a caved in centre with many chocolate kebbits running around the centre, along with a pile of eggs beside every ramp. Players were required to use the eggs as bowling balls.

To bowl at the kebbits, first take some eggs from the bundles by each ramp. Once you have an adequate stock, stand atop the ramp, direct yourself toward the kebbits, wait for the right moment and then bowl! Watch as your egg rolls into the pen, and collect any enchanted chocolate chunks that you manage to create. Ten of these kebbits had to be crushed, converting them into chocolate chunks.

Receiving the chicken feet and legs.

Once ten kebbit chunks were collected, players had to give them to the Easter Bunny, finishing the first task and being rewarded chicken feet and chicken legs.

The bunny wants you to do a final task: obtain a rabbit mould. 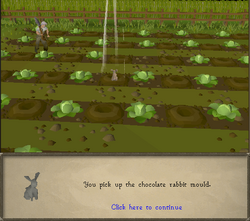 Finding the mould on Nigel's Farm.

Players were given a magic egg from the Easter Bunny to enter a small hole where they had to finish his second task. Players had to stand beside the small hole and eat the magic egg, causing them to transform into a small rabbit, which they would remain as until they left the cavern the hole contained.

Once in the hole, players were surrounded by many rabbit holes which, when dug into, caused them to pop out in a cabbage patch owned by a farmer named Nigel. Nigel would supervise his patch and when he saw a rabbit, he would hit it on the head with his shovel, causing them to fall back into the hole. Of the many holes in the cavern, one of them lead to the rabbit mould, the item the Easter Bunny sent players to receive. Once players had found the correct hole and received the rabbit mould, they could go back to the Easter Bunny to get even more rewards!

By completing this event, players were awarded the Chicken set. The full set contains:

If the Flap emote has been unlocked from the Stronghold of Security, when wearing all the pieces of the set, players can do an improved Flap emote, where their avatar lifts off the ground slightly as if flying.

The Bunny-hop emote is also unlocked if it has not been unlocked in a previous Easter event.

The items can be retrieved by from Diango in Draynor Village if lost or destroyed. The outfit can be stored in the toy box in the Costume room of a Player-owned house.