From the RuneScape Wiki, the wiki for all things RuneScape
Jump to navigation Jump to search
For the sword received as a reward from this activity, see Lost sword of King Raddallin.

The Lost Sword was an activity located on the east side of Falador Park, near Darla. It appeared as a chest after the Falador graphical rework, as part of the Invasion of Falador event.

The activity revolved around obtaining the Lost sword of King Raddallin. Players could help with this between 22 and 26 October 2015. Each day required two different skills. Free-to-play players could not use the members skill, but only the free to play skill.

Players could speak to Darla nearby to check the progress of the activity, claim any rewards and buy additional tools. After the event, players can give the Letter from King Raddallin obtained from the chest to her. There was also a right-click option on tools to check the activity's progress, as well as being able to teleport directly to the park.

Every day that the activity was active, players received 100 basic tools on login. Tools from previous days if not yet obtained would also be given. Additional tool packs could be purchased for loyalty points by speaking to Darla. Players could also earn golden tools from Treasure Hunter, which gave 25 times the experience and contribution if the player's skill level was over 50, or 10 times if below 50. Each set of tools, basic or golden, could be used 5 times before it broke. 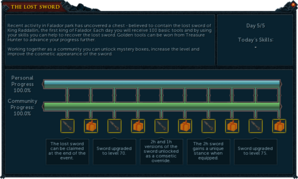 The interface for the activity

In order to participate in obtaining the sword, players could interact with the skill patch and perform the skills required.

Depending on what skill is needed for each day, the skill patch changed in appearance.

It was not necessary to buy more tools using loyalty points in order to reach full personal contribution. If a player spent every day of the activity using their daily tools, they would have reached 100%. For every 100 tools, 20% personal contribution was gained. The sword itself could only be obtained upon the end of the event.

Commendations could be earned per tool consumed (each tool breaking after 5 uses), as was shown in chat by a message: You find 5 commendations trying to recover the treasure chest. If a player had already reached the commendation cap for the day, these wouldn't have been received.