From the RuneScape Wiki, the wiki for all things RuneScape
Jump to navigation Jump to search
The Old School RuneScape Wiki also has an article on: osrsw:RuneFest 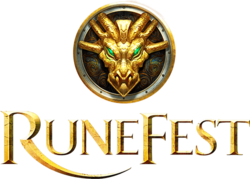 RuneFest is the name of the annual real-world convention for RuneScape and Old School RuneScape players. It usually takes place in the latter half of each year at a location in the UK, and features a variety of different activities for players to participate in, including learning about and experiencing upcoming content.

The event is organised and attended by Jagex, and some panel content is also streamed live on the official RuneScape Twitch channel.

RuneFest 2012 had a poll sent out on the main page regarding possible locations on 25 November 2011.[1] The options were: New York, Los Angeles, Chicago, and London. A livestream in September 2012 announced RuneFest 2012 as cancelled.

RuneFest 2020 was set to go ahead, however was announced as cancelled by Jagex on 9 April 2020. Jagex were unable to finish locking down plans for the venue due to the COVID-19 pandemic:[2]

The first indication that the concept of a "RuneFest" was under development was on 18 March 2010, when Jagex registered the domain name RuneFest.com.[3]

On 24 March, an interview with Mark Gerhard - the CEO of Jagex at the time - was released on the RuneScape YouTube channel. At two seconds into the video, the words "RuneFest 2010" were visible on a whiteboard behind Mods Paul M and Mark G, leading to speculation that Jagex was planning a RuneScape-related real-world event. A month later, Mark was asked about RuneFest several times in his Friends Chat (called Clan Chat at the time) to which he replied:

The website for RuneFest 2010 was launched on 24 April. Tickets went on sale on 30 April to those who had pre-registered. On 9 July, Jagex refunded those who had bought tickets and instead decided to cover the costs of the event themselves. RuneFest events have continued to be held every year since 2010, apart from 2012 and 2020, at multiple locations in the UK including Tobacco Dock and Battersea Evolution in London, and Farnborough International Exhibition and Conference Centre in Farnborough.